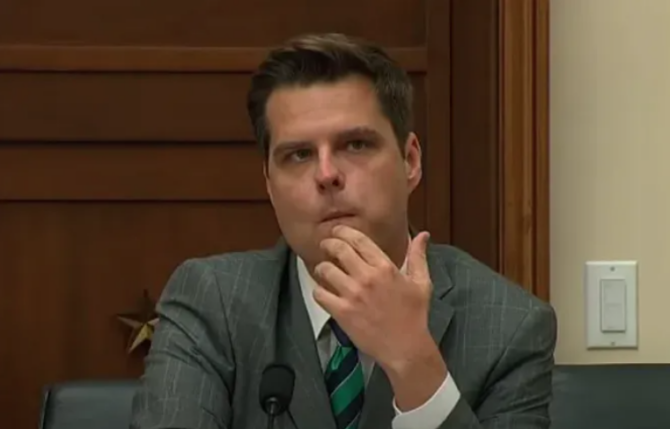 The list of former Matt Gaetz associates cooperating with prosecutors in the sex crimes investigation into the congressman continues to grow longer.

A Florida shock jock with connections to Gaetz has pleaded guilty in a deal that is likely to see him provide evidence against Gaetz.

The Daily Beast reports that “Big Joe” Ellicott issued a guilty plea to “pay bribes and kickbacks,” and also to illegally selling Adderall. His plea deal requires him to cooperate with other ongoing investigations in exchange for a reduced sentence.

Ellicott is a close friend of Joel Greenberg, Gaetz’s former “wingman” who is also cooperating in the investigation.

Ellicott is reported to know key details that could corroborate Greenberg’s version of events.

Related: It sure looks like Matt Gaetz is going to pay for what he did… but not on Venmo

Greenberg pleaded guilty to federal crimes including sex trafficking of a minor, identity theft, wire fraud, and conspiracy last May. As part of his plea deal, he agreed to provide “substantial assistance” to investigators in their case against Gaetz.

Gaetz, for his part, continues to deny having sex with the girl. We’re not sure how much longer that defense can last.

Matt Gaetz is having another horrible day. Cheers.

Not sure if Matt Gaetz realizes this, but all of his criminal friends fully cooperating against him after they agreed to plead guilty themselves in exchange for that cooperation means going to jail is all but inevitable for him. That’s a perp walk I’m looking forward to seeing.

The walls close in on Matt Gaetz!

Matt Gaetz’s lawyers will no longer be able to attack Joel Greenberg’s credibility and call that their primary defense. There are now multiple witnesses against Gaetz – Greenberg, his ex-girlfriend, and now Ellicott. And those are just the ones we know about.

A key witness is cooperating against Matt Gaetz.