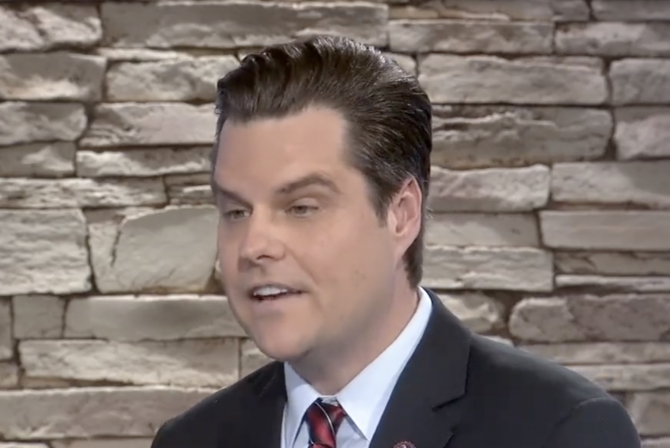 This week, Gaetz revealed that, should Republicans take control of the House in November, he plans to launch an investigation into jail conditions, particularly of people being held on charges related to the deadly January 6 insurrection.

“In the minority, we’re very limited in the tools we have to compel responses from the Department of Justice,” he told reporters. “If we’re in the majority, I do believe the Judiciary Committee is the appropriate place to use compulsory tools to get those responses.”

Related: Matt Gaetz and Marjorie Taylor Greene team up to be extra horrible together

Gaetz, along with several GOP lawmakers, including some who sit on the House Judiciary Committee, says he’s concerned that accused insurrectionists are being subjected to harsh jail conditions as they await their trials.

We’re sure his sudden worry for the wellbeing of American inmates has everything to do with compassion for his fellow man and absolutely nothing to do with that pesky ongoing federal investigation into his alleged sexual relationship with a high schooler.

Speaking of that investigation, this week Time magazine reported that Gaetz keeps a handwritten note from ex-president Trump encouraging him to “keep fighting” on display in his office:

On the wall of the cramped congressional-office-turned-podcast studio, there’s a black-and-white poster for S.J. “Jerry” Gaetz, the congressman’s grandfather, that dubs him “North Dakota’s Most Progressive Mayor.” In a glass display case, there’s a handwritten note from President Trump, scribbled in Sharpie on an article about Gaetz defending himself against a federal sex-trafficking probe involving the transportation of a 17-year-old across state lines. “Matt, This is Great,” Trump wrote. “Keep fighting – You will WIN!”

Gaetz has repeatedly denied paying an underage girl for sex. Meanwhile, his ex-wingman, Joel Greenberg, who pleaded guilty to six federal charges last year, including child sex trafficking, has had his sentencing delayed several times so he can continue cooperating with investigators on the probe into the anti-LGBTQ lawmaker’s alleged crimes.

Sick! I wonder if they'll let him hang it in his prison cell?

Rep. Matt Gaetz (R-FL) has an article on how he’s defending himself against an ongoing sex trafficking investigation — autographed by Donald Trump — prominently displayed in his congressional office.@mattgaetz pic.twitter.com/mH7Qlnddp8

Pervert Matt Gaetz needs to finally be in prison for child sex trafficking, not still running around free being a repugnant asshole.

What the hell is the holdup in putting Captain Venmo Matt Gaetz in jail?

Matt Gaetz is a pervert who doesn't belong in Congress. He belongs in prison! #GOPDeathCult

Why isn’t Matt Gaetz in jail yet?

Why isn’t Matt Gaetz in prison for paying to have sex with minor?

Hey Matt Gaetz @RepMattGaetz, I believe any day is a great day for you to get arrested.#FridayThoughts #FridayMorning pic.twitter.com/F3aXtGidW1