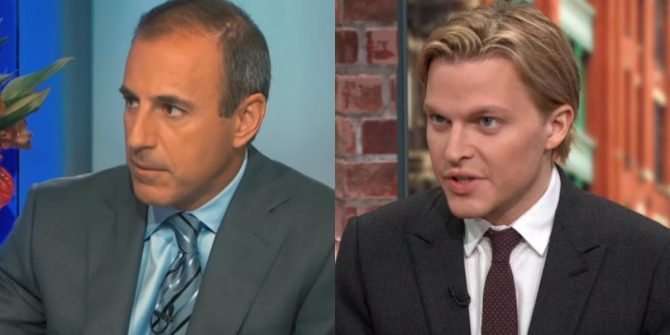 Matt Lauer has returned, but don’t call it a comeback.

The former The Today Show anchor, whose career melted down over allegations of sexual assault and misconduct, published a scathing critique of journalist Ronan Farrow last night. In it, Lauer blames Farrow for destroying his career and calls into question his journalistic ethics and methods.

Farrow, the son of Woody Allen and Mia Farrow, won a Pulitzer Prize in 2018 for his reporting on sexual misconduct in show business, particularly the harassment and blackballing by producer and convicted rapist Harvey Weinstein. Farrow’s nonfiction book Catch and Kill detailed allegations against Weinstein, Bill Cosby, CBS CEO Les Moonves, and against Lauer. In the wake of the allegations, NBC fired Lauer from The Today Show in 2017.

Now Lauer, who has maintained a low profile since his firing, has lashed out against Farrow and rebutting allegations that he raped or sexually harassed women during his tenure with NBC. Lauer cites purposely misleading passages in the book, slams Farrow for not attempting to corroborate allegations against Lauer with third parties and claims that Farrow’s own grudge against NBC helped fuel his discrediting of Lauer.

Lauer also swipes at Farrow for interviewing his former co-anchor Ann Curry, whom Lauer claims attacked him over a personal grudge. Widespread media reports have singled out Lauer as the one responsible for Curry’s sudden firing from The Today Show in 2012.