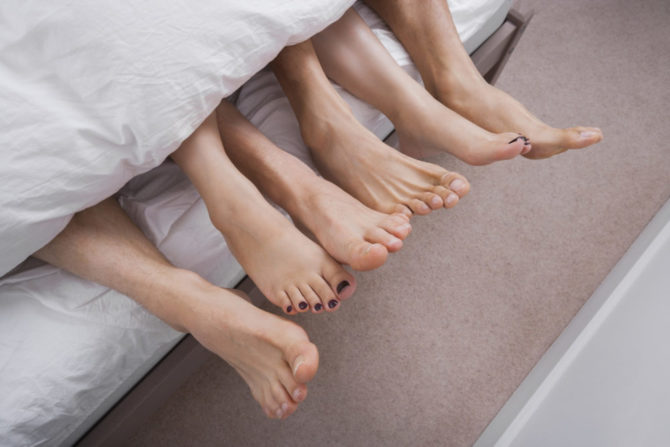 “Threesomes aren’t anything new,” Dr. Ryan Scoats says. “There are references to group sex in Roman art and literature. But while threesomes may have happened in the past, they are definitely becoming more common in contemporary society.”

That’s why he’s dedicated his career to studying them. Scoats is a sociologist from Birmingham City University and is the first person in the world to get his PhD in threesomes.

Why the sudden spike in MMF threesomes?

Well, Scoats says, a lot of it has to do with the growing acceptance of LGBTQ people.

“As sex between people of the same sex loses its stigma, a greater array of behaviors, including threesomes, become acceptable,” he explains.

Also, younger men are becoming more secure in their sexualities.

“A lot of the younger people we spoke to don’t see their sexual identity as limiting what they do,” Scoats says. “That’s why they can have threesomes involving members of the same sex and still consider themselves straight.”

He continues, “Having sex in the presence of another man or woman and even doing sexual things with other men or women can now be part of a heterosexual identity.”

This also explains the rise in things like “bro-jobs” in “dude sex” over the past year or two.

“There are so many misconceptions around threesomes in the media and in the public imagination,” Scoats says. “A lot of people probably see threesomes as a very hedonistic act– happening spontaneously with almost uncontrollable passion.”

But that’s not necessarily the case.

Scoats hopes that by continuing to study and discuss threesomes in an academic setting those misconceptions will eventually dissipate.