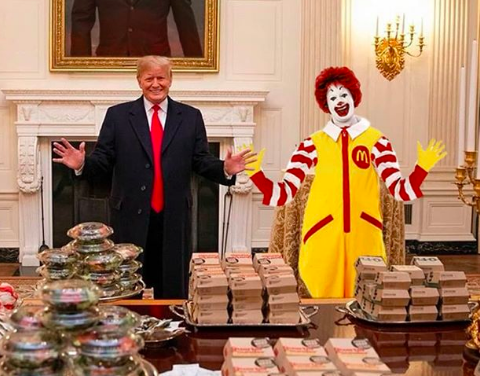 During an appearance on CNN’s Anderson Cooper 360, Speaker Nancy Pelosi was asked about Donald Trump‘s claim that he’s been taking the malaria drug hydroxychloroquine as a preventative treatment for coronavirus.

“I would rather he not be taking something that has not been approved by the scientists,” Pelosi said. “Especially in his age group and in his, shall we say, weight group. Morbidly obese, they say. So, I think that it’s not a good idea.”

“I would rather he not be taking something that has not been approved by the scientists, especially in his age group, and in his, shall we say, weight group: ‘Morbidly obese,’ they say,” says House Speaker Nancy Pelosi on Pres. Trump’s revelation he is taking hydroxychloroquine. pic.twitter.com/0ImjpEjg9q

Within minutes, the words “morbidly obese” and #PresidentPlump were trending on Twitter. People had a lot to say about Pelosi’s remarks. Some accused to Speaker of fat shaming the President. Others thought her remarks were fair game given his long history of body shaming people, including his own supporters…

I’m of two minds about the whole “morbidly obese” thing. On the one hand, kind of a low blow. On the other, it kind of made my day.

Trump has spent so much time calling women fat, including his daughter Tiffany, that it’s about time a woman call him out on being #morbidlyobese.

Can you imagine if @realDonaldTrump called a female politician morbidly obese?

Unpopular opinion, I guess. I think the “morbidly obese” comment from Pelosi is pretty hilarious and the people on the Right getting bent out of shape about it are embarrassing. It’s exactly the kind of thing Trump says about people all the time. He can take it.

As someone who is morbidly obese and has been fat shamed, @SpeakerPelosi did not fat shame. She listed two of the president’s risk factors to Covid: age and weight. Morbidly obese is, in fact, the medical term, based on BMI. #PresidentPlump is fat shaming. Morbidly obese is fact

1) being fat isn’t wrong
2) even if it was, it wouldn’t break the top 100 list of terrible things about him

Love seeing Trump supporters get butthurt over him being called #morbidlyobese yet are fine with the vile things he says about women and minorities???

Mrs. @SpeakerPelosi the shade you threw was magnificent! #morbidlyobese pic.twitter.com/gWEDh55q3y

Quick fact check: To be considered “morbidly obese,” a person must have a body mass index of over 40. According to his February 2019 annual physical report, Trump stood 6’3 and weighed 243 pounds, putting his BMI at 30.4, which makes him obese, but not morbidly so; however, the accuracy of that report, like so many of Trump’s claims, has been questioned.

Related: Trump served a team of champion athletes a greasy buffet of fast food. And now, the memes…