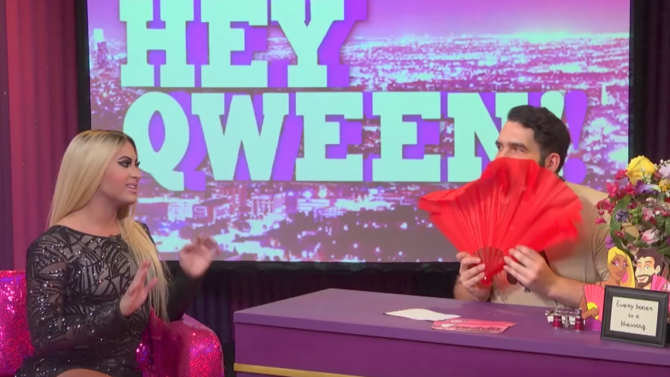 She may not have won the competition on the eighth season of RuPaul’s Drag Race, but Naysha Lopez is no stranger to taking home the crown.

Long before her stint on the Emmy-award winning show, Lopez was a force to be reckoned with on the pageant scene and even won the title (and yes, the crown) of Miss Continental in 2013.

But Naysha’s journey in drag hasn’t always been pageant perfect. As a child, she describes herself as “thin” and “girly” and that she just didn’t fit in.

“Growing up was rather difficult,” she reveals to Hey Qween host Jonny mcGovern.

“It really was. I was that feminine, old soul type. I didn’t really want to go outside and play with the other kids.”

“The first time I was caught in drag, I was like four or five, I was wearing my cousin’s bridesmaids dress,” she explains. “And mind you this was 1989, it was purple with these big ruffles and totally hideous, but I was living for it.”

As she grew up, Naysha found dance as a way to express herself, but it wasn’t until one fateful day that she embraced the expression of drag.

“At the time I was a backup dancer,” she says. “There was this amateur drag contest and I was convinced into doing it and I ended up winning.”

After winning the contest Naysha continued performing in drag, a decision that would soon consume and transform her life.

“I worked at a finance company, but I was doing so much drag that I started coming into work late all the time,” she reveals. “It was at that point that I decided that I wanted to pursue drag 100 percent.”

Related: Nina Bo’Nina Brown opens up about her standout (but rocky) run on “Drag Race”

“I was doing bar gigs like seven nights a week and then I started doing the pageants. I saw that there was an opportunity where this could actually put food on the table and it’s something I loved to do so I just stuck with it.”

As Naysha’s drag persona began to form and her look became more refined, she found herself in the high stakes world of drag pageantry.

“Back in the day, pageants were very cut-throat. You had an assistant and his job was to watch your stuff. Back then the competition would spill stuff on your gowns, put glass your your powder, they’d spill water on your makeup, things would go missing… it was just really cut-throat.”

As for her experience in the pageant world, Naysha says things were a lot of more positive than the “cut-throat” environment of the past.

She adds, “It really does help you polish your look from head to toe and really helps you find yourself as an entertainer.”

After a few years in the pageant scene Naysha would achieve her dreams of being crowned Miss Continental.

“Winning Continental was always a dream and goal for me and I achieved it. So after that, I was ready to move on and so I went for Drag Race.”

But as many queens know, getting on the Race isn’t as easy as one may think.

Related: The world is finally ready for Mrs. Smith, the guitar-shredding drag queen

As for who the mystery queen is, you might remember her from the very first season of RuPaul’s show, and as for what that certain queen did, Naysha’s keeping that sip of tea to herself.

“I don’t really want to talk about the queen… Jade Sotomayor,” Naysha says under her breathe. “I won’t go into what happened, but yeah she ruined it for me.“

Despite the setbacks Naysha would soon be cast on the eighth season and would be eliminated and called back during that infamous episode.