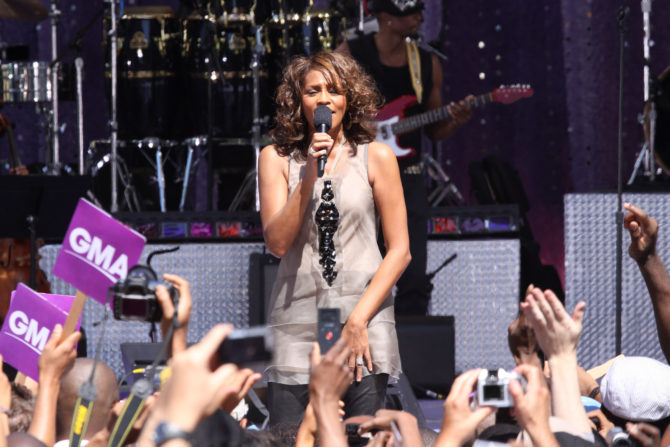 The queer community still mourns the loss of Whitney Houston, the iconic singer whose remarkable vocals lit up many a gay nightclub dance floor with hits like “So Emotional” and “It’s Not Right, but it’s Ok.” With a career that spanned almost three decades, she conquered the recording world, starred in several hit films, and inspired countless drag performers worldwide–the hallmark of any true cultural icon.

The new documentary Whitney: Can I Be Me? debuted on Showtime. As co-directed by noted muckraking filmmaker Nick Broomfield and Rudi Dolezal, Can I Be Me? delves deep into Houston’s inner circle, showing the dark side of the pop diva. Houston shocked the world with her premature death in 2012 by drug overdose and downing. According to the new film, Houston carried multiple heavy secrets which contributed to her struggles with addiction.

Perhaps most shocking of all, though, the film finally confirms what the queer world believed (or at least wanted to believe): Houston had multiple lesbian affairs. The participants in the film label Whitney bisexual. Her friends explain in the film that Houston shared her most enduring, passionate relationship with Robyn Crawford. Crawford, an out lesbian, worked for years as Whitney’s assistant and general handler. More important than any clerical duties though, Robyn gave Whitney the kind of tenderness and stability she never found elsewhere in the recording world, or even within her own family.

Their love carried a heavy price. Whitney’s mother, singer Cissy Houston, never approved of her relationship with Robyn, and her staunch, Christian fundamentalist upbringing made Whitney feel, at times, ashamed of their love. As Whitney’s career began to take off, the recording world stepped in too. Not only did Houston have to maintain a certain image and sound that never sounded “too black,” she could never seem too lesbian either. With pressures mounting on Whitney, and with the rumor mill beginning to buzz about her relationship with Robyn, the singer shocked the world by marrying bad boy musician Bobby Brown. Brown has admitted in his memoir and in interviews that he knew about Whitney’s relationship with Robyn, and always suspected that she sought him out as a means of deflecting attention from her bisexuality.

Cissy Houston, for her part, always claimed she hated Bobby Brown but admits to her own shame in the film that she hated Whitney’s relationship with Robyn even more.

So it’s not surprising Brown and Houston had a terrible marriage. Whitney’s drug use increased, as did her drinking. Robyn stuck by Whitney during the first years of her marriage. Rising tensions between Robyn and Bobby, however, forced Robyn to leave Whitney’s employment in 2000. At that point, Houston began a long, public downward spiral that would last the rest of her life.

The 2000s saw Whitney battle drugs and alcohol, struggles with family, legal troubles, career setbacks, divorce Brown, and the deterioration of her voice. Whitney: Can I Be Me? details the singer’s remarkable career with frankness and tender affection, and offers a rare look at her private life via previously unseen concert footage and home movies. But the movie begs the key question: If Houston’s family, the recording industry, and even Whitney herself more accepted her love for Robyn, could she have conquered her drug addiction had enjoyed a longer, happier life? What if Whitney had known and embraced the truth that we in the queer community hold so dear—love is love?

The sky was the limit.

Whitney: Can I Be Me? is now playing on Showtime.