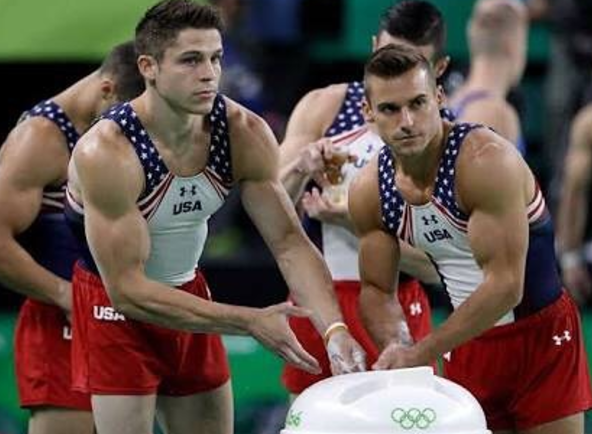 Here’s an idea no reasonable person should oppose: In the spirit of increasing the visibility of men’s gymnastics, how about athletes take a cue from the Romans and compete with a little more exposure to the elements?

That’s the genius idea from team USA’s Sam Mikulak. In an interview with The Wall Street Journal, the US all-around national champ reasoned that if gymnasts “compete with [their] shirts off,” perhaps viewership would tick upwards. We think he’s definitely onto something here.

“People make fun of us for wearing tights. But if they saw how yoked we are maybe that would make a difference.”

That is simply sound reasoning, plain and simple.

And this isn’t pure theory — they’ve already tested it out to some degree.

You probably recall seeing this photo of team USA in Rio for the Olympic games in 2016:

Turns out that was a little less candid than everybody thought.

In an article titled “U.S. Male Gymnasts Want to be Objectified,” the Wall Street Journal reports:

That [photo] wasn’t an accident. It’s one of the ways they think they can get attention in a country that showers glory upon gold-medal-winning women gymnasts while ignoring America’s less-successful men’s team.

So the men’s team has been brainstorming ways to market their sport better. They would like to be objectified.

…there’s a feeling on the men’s team that even if they won gold, they wouldn’t enjoy the stardom that America confers upon its top female gymnasts. Jonathan Horton was the top American men’s gymnast at the 2008 Olympics, where he won silver on high bar. That same year, the top American women’s gymnasts were gold medalists Nastia Liukin and Shawn Johnson, who instantly became household names.

“You would think that the top guy in a big-time sport like that could get, like, not a LeBron James contract, but some good money,” Horton said. “You really can’t make a living off men’s gymnastics.”

Once again — no argument here:

Sam Mikulak is currently fourth in the all-around standings.

Love this team for making last night so much fun, but keeping our eyes set on tomorrow's competition ??

So stoked the limited edition Brooks X-bands came in before we left!! I'll be keeping my grip straps tight at the games in style thanks to @thegymnastx check out their site for your own style or rock your favorite gymnasts edition. ????

Thank you @elleusa for this awesome shot… It was such a fun photo shoot!!

When you get too hyped up for the #kelloggstour