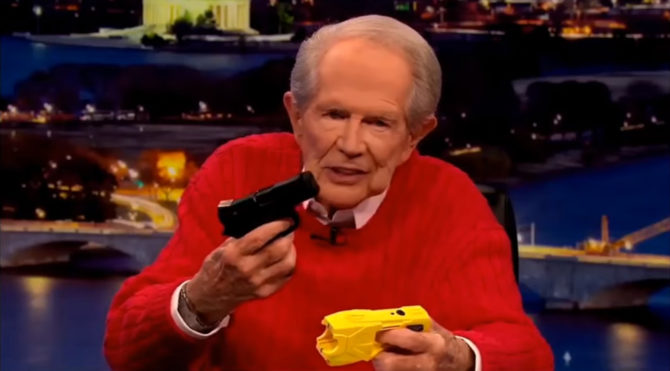 During the April 15 broadcast of Robertson’s holy-rolling talk show The 700 Club, the televangelist came out against former cop Kim Potter, who has been charged with manslaughter in the killing of unarmed 20-year-old Daunte Wright. Potter claimed to have accidentally grabbed her gun and shot Wright; she claims she was reaching for her taser.

“There’s just no comparison,” Robertson uttered while comparing a model of a taser to that of a gun. “Now how she made the difference, when she shot that poor guy to death, saying this is what I thought was my taser. And if you can’t tell the difference in the feel of those things, it’s crazy.”

Robertson then reiterated that he supports police and the need for law enforcement, though went on to bemoan the death of George Floyd last year, and the recent pepper spraying of unarmed, Army Lieutenant Caron Nazario. Former police officer Derek Chauvin is currently on trial for murder in connection with the death of Floyd.

Related: Pat Robertson On Gays And Muslims: Let Them Kill Themselves

“You know, the police in Virginia picked up a lieutenant in the Army and began to give him trouble — and our state police are highly trained, but why they don’t stop this?” Robertson said, referring to the case of Nazario.

“And this thing that’s going on in Minnesota with Derek Chauvin,” he then added. “I mean, they ought to put him under the jail. He has caused so much trouble by kneeling on the death of George Floyd — I mean his neck — it’s just terrible what’s happening.”

“And the police, why don’t they open their eyes to what the public relations are, they’ve got to stop this stuff,” Robertson concluded.

Robertson then went on to undermine his rare moment of sanity and attribute the recent rash of police violence to underpaying officers. “We don’t have the finest in the police department,” he said. “They’re low-paid people… it’s not a question of training, it’s a question of hiring a more superior workforce, and we aren’t doing it.”

Pat Robertson is not a man known for rational argument. In 2017, he attributed the Las Vegas massacre which left at least 59 dead and more than 527 injured to a lack of respect for Donald Trump. Throughout his career in television, Robertson has also demonized queer people, attributing AIDS to God’s judgment, claimed gay men had special rings that would spread HIV, advocated conversion therapy, and claimed a nuclear war would sweep over the Earth if American Christians couldn’t discriminate against queer folk.