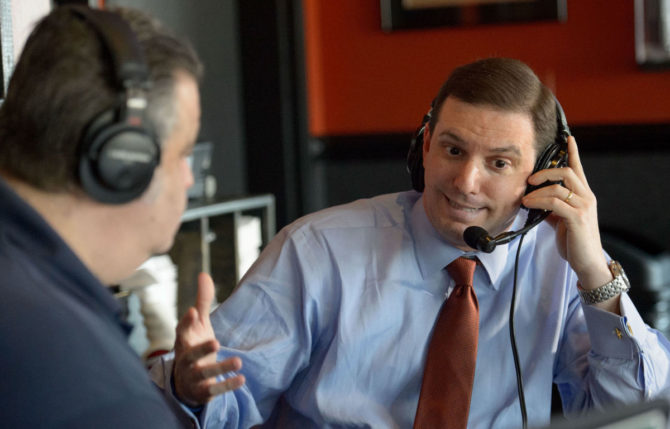 Despite insisting that he and his family have “moved on” from the whole Catholic school boy sexting scandal, “not gay” Republican Mike Yenni’s constituents have not.

In case you need a recap: Yenni is the Parish President of Jefferson Parish in Louisiana. Last September, he was outed for sexting with a Catholic school boy he allegedly met at a graduation luncheon in 2015. (Yenni was 38 at the time; the boy was 17.) The two exchanged a series of dirty text messages before meeting up in a mall bathroom where Yenni allegedly gave the boy a pair of $75 designer underwear. Since the scandal broke, Yenni has admitted to sending “inappropriate texts” and apologized for his actions but he has refused to step down from office.

Related: Mike Yenni And Wife Are “Moving On” From Gay Teen Sext Scandal So You Should Too

Well, during a 50-minute appearance on a midday radio show yesterday, the 40-year-old father of two was bombarded with questions from angry callers who wanted to know more about the whole sexting scandal.

Yenni sat down with Eric Asher at WGSO-AM’s “Inside New Orleans” hoping to discuss the upcoming Mardi Gras season, but Asher had a different agenda. He wanted to know about the $75 underwear.

Asher then pivoted by telling Yenni he was missing an opportunity to put the scandal to rest by refusing talk about it. Then he accused the Republican lawmaker of being a hypocrite for running a “campaign on family values” while keeping such a dirty little secret.

“I didn’t campaign on family values, Eric,” Yenni was quick to respond, “because, you know, I come from a broken home.”

“People ask the question, ‘How can you be a good family man at the same time if you’re involved in that type of behavior?’” Asher pushed back.

“Eric, all I can tell you is people make mistakes,” Yenni replied. “I’ve asked God for forgiveness; I believe God is a merciful God.”

And then things got really awkward. Because Asher opened up questions from unscreened callers. They, like him, really wanted to know about the $75 underwear.

When Yenni repeated that he wasn’t going to get into specifics, the caller said, “I pay your salary!” To which Yenni replied, “That has nothing to do with my salary.”

Another caller said he didn’t like how Yenni called the teen a liar. “I’m not calling anybody anything,” Yenni quipped.

Yenni also refused to answer questions about a series of sexts he allegedly exchanged with eight different men and one women on a government-issued cellphone over a three-week period in 2009 and 2010. In the texts, Yenni writes about specific sex acts with some of the men, including one in which he discusses having sexual relations in his office.

“I’m not commenting on that because I don’t believe anything that was in those text messages,” Yenni said. “I’ve been shown some of those, just recently. I didn’t even recognize some of the numbers that they came from so I’m not even going to comment anymore on those.”

It was a rough 50 minutes for Mr. Yenni, but at least it ended on a slightly positive note. The final caller was a woman named Noki who phoned in to say that if Yenni’s wife could forgive him, so should other Christians.

“I am proud to say today that I would stand next to you and your wife, and that’s the reason: Your wife stands next to you,” Noki said.