The Step Out: JT LeRoy

Director Justin Kelly (I am Michael, King Cobra) returns with his most accomplished film to date. JT LeRoy recounts the real-life scandal of the titular bisexual prostitute literary wunderkind, later revealed to not exist. Rather, the fictional author and his novels sprung forth from the mind of a middle-aged bisexual woman (played by Laura Dern, in a hysterical performance) aided by her bisexual sister-in-law (Kristen Stewart) who impersonated the male author at readings. Things get hairy when a world-famous actress (Diane Kruger) wants to adapt one of JT’s stories to the big screen and gets the hots for the author too. We wouldn’t believe the story if it hadn’t actually happened. Jim Sturgess and Courtney Love also star in a comedy all about the fluidity of gender, sexuality, and character.

The Art House: The White Crow

Actor Ralph Fiennes (Schindler’s List, The Harry Potter series) shifts behind the camera in this ambitious biography of legendary queer dancer Rudolf Nureyev. The White Crow focuses on Nureyev’s life leading up to his defection from the Soviet Union in 1960s Paris, and his rise as one of the foremost ballet dancers in the world. Newcomer Oleg Ivanov embodies Nureyev with all the arrogance, charisma and animal sexuality of the real thing (he has a full-frontal nude scene), and recreates some of his most stunning dance combinations. Whether or not Fiennes tones down Nureyev’s sexuality is open to debate. See the film and judge for yourself.

The Binge: She-Ra and the Princesses of Power – Season 2

We’ve been counting down the days since we binged Season 1 of the epic Netflix reboot of the classic 80s series. Having now seen Season 2 in advance, we can say it disappoints only in that we wish it could have been longer than seven episodes. The new season picks up after the conclusion of Season 1, finding She-Ra leading the princesses against the Horde, Shadow Weaver in prison and Hordak bent on destroying his new nemesis. Much as with the first, the new season celebrates diversity, femininity and how true heroes do more than fight: They inspire others to be better too. She-Ra also continues its revelry of queer characters, introducing the hunky Bow’s two dads as an adorable married couple. Added bonus: One episode that pays homage to the designs of the original show, complete with a reprise of a certain theme song.

The Revolutionary: The Most Dangerous Year

This documentary follows 5-year-old Anabelle Knowlton, a transgender girl living in Washington state during the heated debate over several anti-transgender bathroom bills in 2016. Amid the fierce anti-queer climate of the time, director Vlada Knowlton–Anabelle’s mom–explores the stories of other transgender children as well as the underhanded tactics adopted by right-wing politicians and interest groups to codify discrimination against transgender people. Infuriating and inspiring, The Most Dangerous Year tells the story of trans people in a whole new way, and also features the most adorable young activists in recent memory.

Opens April 26 in Los Angeles. A streaming roll-out will follow.

The Date Night: The Third Party

This Filipino flick lands on Netflix this week. The story of exes Andi and Max, a couple that works hard at staying friends after their break-up. Things don’t go so well when Max tells Andi he’s found new love with another man: the hunky Christian, a pediatrician. We’ve seen similar comedies here in the states, though this one marks a breakthrough for Filipino cinema. Besides that, it also offers a certain bizarre anti-abortion twist bound to spark discussion, even if it means a happy ending.

Finally coming to Blu-Ray this week, Tickled tells a story like no other. Out-gay documentarian David Farrier traces the origin of bizarre online videos dubbed “competitive tickling,” a “sport” that involves hunky young men wrestling and tickling each other in a “totally heterosexual way.” If you just rolled your eyes at that statement, you’re not the only one. Farrier embarks on a long and twisting search leading him from his native New Zeland to the US to find the models featured in the videos and the elusive, litigious woman behind them. Suffice it to say Tickled takes some very strange turns as Farrier finds himself plunged into a weird, fetishistic underground and on the trail of a dangerous and mysterious villain.

The Sip: The Virtual Reality 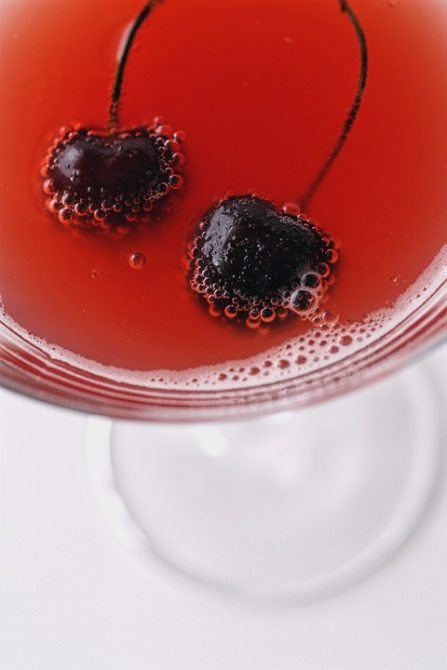 Since most of our selections this week focus on real people, events and real-if-improbably fetishes, we thought we’d feature a similarly themed whiskey cocktail. Smoky and rich with cherry and chocolate flavor, the Virtual Reality makes for good sipping in and out of the oculus.

Mix everything except champagne in a cocktail shaker over ice. Shake. Pour into glass and add champagne. Garnish with a cherry.