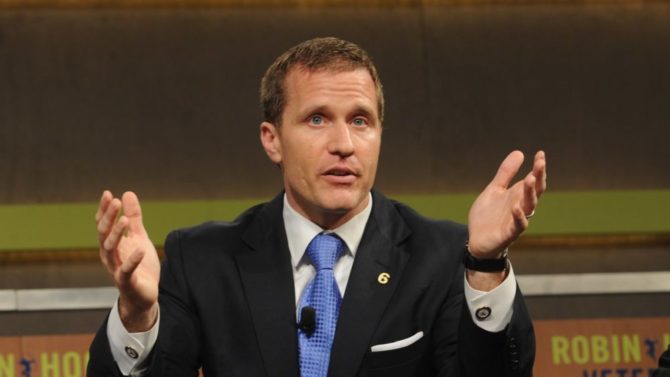 Another shoe has dropped in the case involving “family values” politician Missouri Gov. Eric Greitens and the mistress he allegedly tried to blackmail.

Just to recap: Back in February, Greitens, who believes “people of faith are under attack in America” and doesn’t believe trans people should be allowed public bathroom access, was charged with first-degree felony invasion of privacy after a woman accused him of tying her to a chair in a basement then trying to blackmail her to keep quiet about their extramarital affair.

Now, even more details surrounding that scandal have emerged.

According to a report released yesterday by the Missouri House Special Investigative Committee on Oversight, the woman was 44-year-old Greitens’ former hair-dresser-turned-mistress who lawmakers have deemed “an overall credible witness.”

“Upon entering the basement, Witness 1 testified that Greitens taped her hands to pull-up rings with ‘this gauzed tape stuff’ and then put a blindfold on her,” the report reads.

After Greitens ripped open her blouse and pulled down her pants, the woman says she heard what sounded like a picture being taken.

“‘[T]hen I hear him kind of, like, step back–take a step back and I hear–I can hear like a, like a cell phone–like a picture, and I can see a flash through the blindfold,'” she testified.

The report goes on to say that the woman felt “fearful, embarrassed and ashamed” after Greitens took the photo.

“Witness 1 testified that after she stated, ‘I don’t want this,’ Greitens ‘stood up and started helping me take down the tape. He was like … calm down, it’s OK,'” the report reads.

When she tried to leave, the woman testified, “He grabs me and like–like, in a bear hug–and was like, shh, shh, it’s OK, calm down, calm down, and like lays me down on this ground in the basement.”

While she was on the floor, she says Greitens pulled down his pants and asked her to perform oral sex on him.

Although neither she nor the committee saw the actual picture, it goes on to quote Greitens’ accuser as saying he went on to threaten to release the photo, according to the report. The witness also testified that Greitens said, “Don’t even mention my name to anybody at all, because if you do, I’m going to take these pictures, and I’m going to put them everywhere I can.”

Greitens, of course, denies everything.

“This was an entirely consensual relationship, and any allegation of violence or sexual assault is false,” he says in a statement. “This was a months-long consenting relationship between two adults.”

“The accusations published in the House Committee’s report will be directly contradicted by the facts that emerge in court.”

When asked by the committee if she consented, the woman said, “It felt like consent, but, no, I didn’t want to do it.”

“Coerced, maybe,” she added. “I felt as though [performing oral sex while lying on the ground] would allow me to leave.”

Meanwhile, Greiten’s wife, Sheena, has released a statement saying she stands by her man, claiming they have an extremely “loving marriage and an awesome family,” and that “anything beyond that is between us and God.”