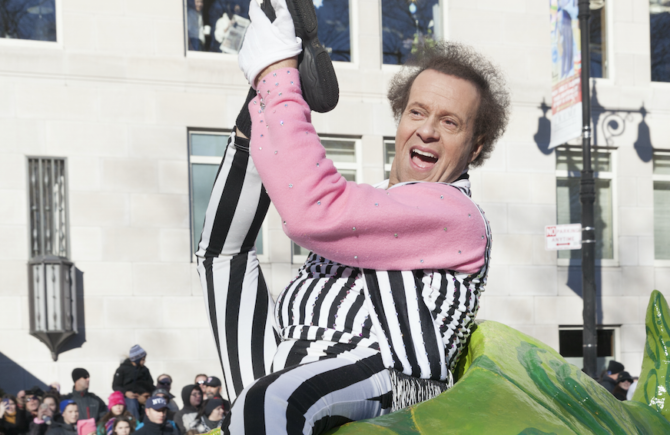 Richard Simmons alleges he’s been “blackmailed, extorted, and stalked” by his former associate Mauro Oliveira for the last several years.

He’s now suing The National Enquirer and its publishers.

The 68-year-old fitness icon claims Oliveira’s schemes are what have been keeping him out of the spotlight in recent years.

Related: Missing Richard Simmons podcast skyrockets to #1 on iTunes as fans worry he’s being held against his will

He accuses Oliveira — who isn’t named as a defendant in the suit — of selling patently false information to National Enquirer and its affiliate site, Radar Online. Both are properties of American Media, Inc.

The lawsuit, filed in Los Angeles Superior Court, alleges that Oliveira — who was not named as a defendant in the suit — was selling false and libelous information about Simmons to the National Enquirer and Radar Online, both owned by American Media, Inc.

According to his lawyers’ court filing:

“Since early 2014, Mr. Simmons has taken a leave of absence from the media spotlight in order to retreat from his 40-year career in television, fitness and other arenas of entertainment. Starting from around May 2015, Mauro Oliveira, an individual who has blackmailed, extorted and stalked Mr. Simmons for several years with the intention of destroying the career and reputation of Mr. Simmons, contacted several press outlets, including the National Enquirer and Radar, and offered information on Mr. Simmons’s disappearance in exchange for a fee.”

The suit alleges Oliveira continually contacted the Enquirer, positing different theories as to why Simmons was in hiding.

First, it was reported he was “frail, weak, and spiritually broken.”

Second, he was “being held hostage by his housekeeper who was controlling Mr. Simmons, taking advantage of his weak mental state and engaging in witchcraft.”

Riveting stuff to be sure, but, Simmons says, wildly untrue.

Third, it was reported — again, falsely — that Simmons was transitioning.

The suit claims both Radar and the Enquirer “knew and acted in reckless disregard for the fact that the information provided by Mr. Oliveira was false and that he was not a credible or reliable source.”

Prior to the lawsuit, an American Media, Inc. spokesperson told People they don’t share their sources:

“While we have not seen Mr. Simmons’ complaint, we stand by our reporting about him, all of which was based on solid sourcing and material evidence. Should he choose to proceed with his lawsuit, we will defend it vigorously, and we look forward to the public vindication of our reports.”