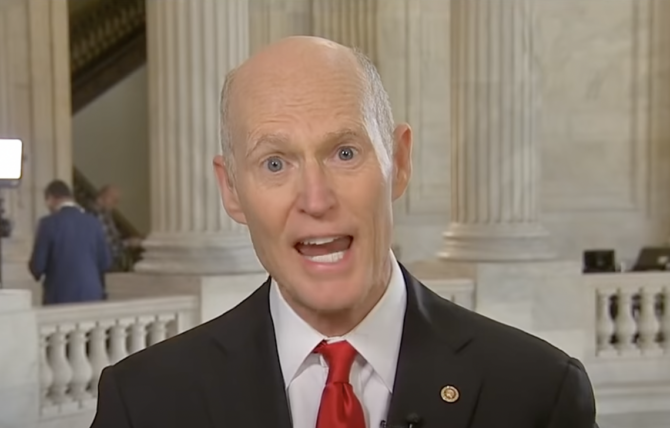 It looks like Sen. Lindsey Graham isn’t the only treasonous Republican who President Joe Biden won’t pick up the phone for.

Last night, Sen. Rick Scott went on Laura Ingraham‘s show to bitch about how no one at the White House will take his calls.

“It’s so bad, Laura,” the Florida congressman said. “I called the White House this week over something that’s going on in Cuba and they hung up on me. I said, ‘I’m a sitting U.S. Senator. You won’t take a message or anything?’ They said, ‘No. It’s disrespectful to say that.’ And they hung up on me!”

Rick Scott claims he called the White House this week and got hung up on pic.twitter.com/mOPdtD0qQy

Scott, who famously refused to use the words “gay” and “LGBTQ” when acknowledging the Pulse shooting in 2016, implied that the reason the White House wouldn’t speak to him was because he’s a Republican.

While that certainly could be why, we’re guessing his attempts at overturning the 2020 election results, his opposition to the January 6 investigation, his undying support of Donald Trump, and the fact that he never misses an opportunity to attack Joe Biden or Kamala Harris in the press might have more to do with it. But who knows?

Of course, that’s also assuming Scott is even telling the truth. Given his track record, there’s a very likely chance none of this ever happened and he’s making the whole thing up.

It’s probably a lie that the WH hung up on Rick Scott, but I kinda hope it’s true. I know I’d hang up on him.

To be fair, most people would hang up on rick scott.

Ancient lore tells a tale that once every four hundred years, the planets align beneath the North Star and for that ONE night, underneath that spectacular starlight, conservatives stop whining like little babies at every single slight, real or imagined.

Even if this is 100 percent true, why would he call the WH directly anyway? POTUS doesn’t owe this guy anything.

Strangely I don’t believe him.

He probably dialed the other White House being republican. pic.twitter.com/eX2qcg97hM