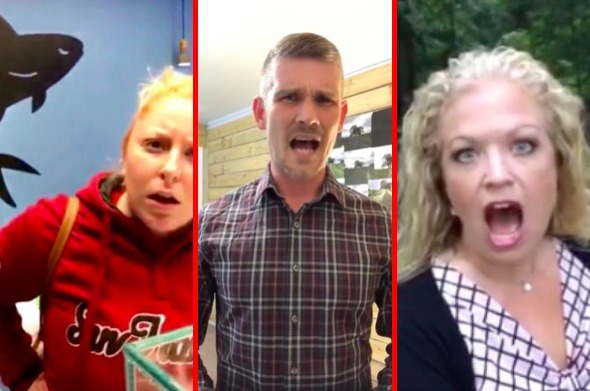 Scroll down for some of the most ridiculous, most insane, most unhinged video meltdowns of 2017…

"OPERATION PULL TEEN VOGUE" is underway! Teen Vogue Magazine must be pulled from all store shelves! It is a danger to children. Please SHARE to warn others. #PullTeenVogue #TheActivistMommy #RoarMamaBears

The angry pastor from Tennessee recorded himself having a meltdown over gay wedding cakes. In the video, he told “the LGBTABCDEFG” of America that if they want to serve cakes at their weddings they should hire a Muslim baker rather than targeting God-fearing Christians. And, while their at it, they should stop being such perverts in the bedroom.

While waiting in line at a restaurant in Santa Monica, Storelli became incensed when she witnessed a heterosexual couple kiss. In fact, she was offended by what she saw that she felt the need to throw an epic, seven-minute, profanity-laden tantrum accusing the couple of “doing prostitution in public” and slut-shaming the woman, calling her a “slut,” a “prostitute,” a “b*tch,” an “ugly b*tch,” and “the ugliest b*tch I’ve ever seen.”

The California slumlord was caught on tape shouting the word “fag” more than a dozen times at a gay man on the street. After being exposed, he tried insisting that he couldn’t possibly be a homophobe because his brother was gay and died of AIDS in 1994 after “after a 22 year battle.” Unfortunately for Gelb, HIV/AIDS wasn’t identified until the early ’80s and the video speaks for itself.

After falling out with Anderson Cooper, who she called a “spineless heiress” when he criticized her for taking a picture with a bloody Donald Trump head, the 57-year-old comedian went after Andy Cohen. Griffin was pissed because CNN hired Cohen to replace her as Cooper’s New Years Eve co-host, so she recorded a 17-minute video trashing him and talking about how she has been an LGBTQ ally for years and it’s so not fair that “the gays” are now turning their backs on her.

After participating in the white supremacist rally in Charlottesville, Virginia, the   36-year-old racist, alt-right, neo-Nazi, homophobe recorded himself literally sobbing after learning there was a warrant out for his arrest after threatening people with violence. Cantwell is currently rotting away inside a Charlottesville jail, where he’s been busy reading Hitler’s book Mein Kampf.

In an angry sit-down interview with Fox News Sunday, the counselor to the president lashed out at the media, claiming that anyone who says anything even remotely negative about Donald Trump should be fired from their job, complaining that she hasn’t gotten a good night’s sleep in months, and claiming that all the negative criticism of her has left her with “gaping, seeping wounds.”

After handily losing the election in Alabama, failed GOP Senate candidate Roy Moore refused to concede to his opponent and instead released a video rant in which he attacked trans people, gay marriage, and abortion, claiming they have “taken the place of life, liberty and the pursuit of happiness.” Leave it to the guy accused of sexually assaulting multiple women and girls to refuse to take no for an answer.