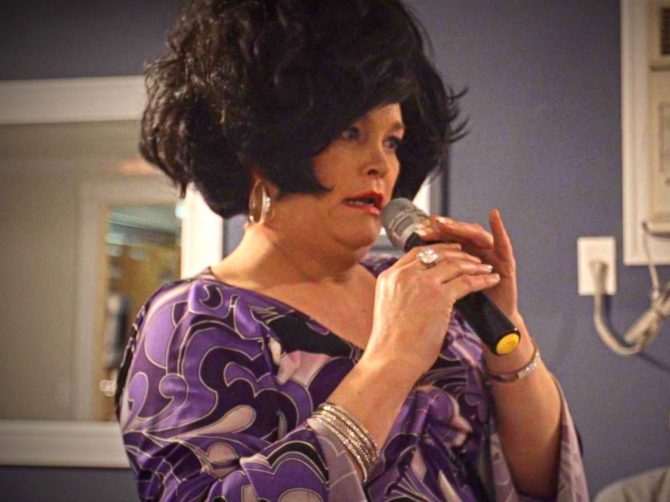 Once upon a time, Jennifer Bobbi was known as Long Island’s famed Tupperware queen. She sold hundreds of thousands of dollars’ worth of kitchenware, raking in a hefty six-figure salary along the way.

Bobbi was known to her clients as Aunt Barbara, a drag queen who dressed in 1960s-era getups, lots of makeup, and a black bob wig. Her sales pitch included lots of attitude and sassy comebacks.

Related: LCD Soundsystem’s Gavin Russom comes out as trans: “I’m the happiest I’ve ever been”

Over the years, Bobbi became so successful selling Tupperware that she earned cash bonuses, cars, and trips to Hawaii, Florida, and New Orleans. She appeared on several local television programs and developed a strong social media following.

But unbeknownst to her clients and fans, there was something much deeper going on underneath the hair, the makeup, and the false eyelashes. From a very young age, Bobbi had known she was a woman.

Two years ago, Bobbi decided to drop the act and begin living her life openly as a woman. Almost immediately, she noticed a change in how her clients treated her.

Unfortunately, that wasn’t the case. Many of her longtime customers stopped buying products from her and canceled their Tupperware parties.

“I do think that my transition was a major contributing factor to the decline in my business,” Bobbi says. “I noticed that some people don’t understand the difference between what they perceived as a drag queen or as being transgender or a cross-dresser.”

Earlier this year, Bobbi came close to bankruptcy; business had “dried up.”

“I was able to have a good standard of living, and that went away, just slowly went away, little by little. Things got harder,” she says. “Eventually, I wasn’t able to pay for basic necessities.”

Sadly, this sort of thing is not uncommon. According to transequality.org, one in four trans people have lost a job due to bias, and more than three-fourths have experienced some form of workplace discrimination.

“It’s funny–it’s all fun and games when you’re perceived as a man dressing as a woman but you don’t want to be a woman,” Bobbi says. “But when you’re biologically a man and internally and innately you’re a woman, then it’s not so funny anymore.”

She managed to find work as an executive assistant at a nonprofit and as the caregiver for an individual with disabilities, but she earns just a fraction of what she made before her transition.

“I didn’t ask for this. No person that’s transgender asks to be transgender,” Bobbi says. “I would love to continue being who everyone wants me to be or needs me to be or thought I was, but I can’t.”

“I have to be true to myself. I have to be who I am. I’m the one who’s going to be living the rest of my life.”