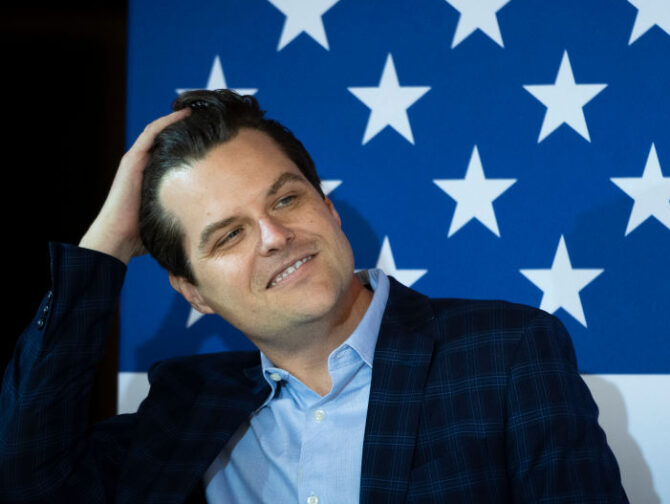 Another day, another outrageous story involving Matt Gaetz and his enormous forehead.

After weathering that whole underage sex scandal that dominated headlines for much of the last two years, rumors that the anti-LGBTQ lawmaker has allegedly been hooking up his male press secretary began circulating on Twitter this week.

Now, before we go any further, we should note that these rumors appear to have been started by Rebekah Jones, so take them with a large–very large–maybe even huge–grain of salt.

Jones, as you may recall, was the Democratic Party nominee who ran against Gaetz for Florida’s 1st congressional district last year. She also has a history of, shall we say, questionable behavior.

In 2019, she was arrested and charged with stalking her ex-boyfriend, who also happened to be her student at Florida State University. Prior to that, she faced a number of other charges, including felony robbery, trespass, and contempt of court, stemming from an alleged violation of a domestic violence restraining order related to the same ex-boyfriend. The charges were eventually dropped.

In 2017, she was arrested and charged with criminal mischief for vandalizing her ex’s car. Those charges, too, were later dropped. And in 2016, she was charged with battery on a police officer, remaining after forbidden, and two counts of resisting arrest after she refused to leave her office when she was fired from Louisiana State University.

Still, her wild accusations against Gaetz have caused quite a bit of online chatter.

“!!!BREAKING!!! Matt Gaetz is believed to be having an affair with his press secretary, Joel Valdez, according to three independent sources. Gaetz’ office and his wife have not responded to requests for comment. This is not Gaetz’ first affair, nor is it his first w/a man,” Jone tweeted yesterday afternoon.

Matt Gaetz is believed to be having an affair with his press secretary, Joel Valdez, according to three independent sources.

Gaetz' office and his wife have not responded to requests for comment.

This is not Gaetz' first affair, nor is it his first w/a man.

She followed that up with another cryptic tweet, saying: “I’ve had some strange conversations with Matt Gaetz’ former ppl over the last few months including the person who hosted his watch party. Cameras everywhere, Matty.”

I’ve had some strange conversations with Matt Gaetz’ former ppl over the last few months including the person who hosted his watch party.

In another tweet, Jones claimed Gaetz’s office was in “upheaval” after the FBI allegedly got its hands on photos of the congressman “making out with young men.”

“UPDATE: Source in Matt Gaetz’ office says office is in ‘upheaval,’ they expect the FBI to raid the office ‘any day now,’ and have photos of Gaetz making out with young men. Gaetz has prev. been in open relationships with men. Still need photo expert to authenticate photos,” she alleged.

Source in Matt Gaetz' office says office is in "upheaval," they expect the FBI to raid the office "any day now," and have photos of Gaetz making out with young men.

Gaetz has prev. been in open relationships with men.

When someone asked whether one of the men in the alleged photos looked like Nestor, the younger brother of Gaetz’s ex-girlfriend who he started calling his “son” back in 2020, Jones replied, “Actually, yes.”

Neither Gaetz nor Valdez have commented on the affair rumors. Gaetz’s new wife, Ginger, has also been quiet on the matter. (Perhaps she’s busy doing more late night vocal warm ups in the Capitol Rotunda?) But Twitter has been having a field day with the story. Most people appear to find the whole thing stupid and amusing rather than taking it seriously.

NEW:
The word on the street is Matt Gaetz got caught having an affair with his Press Secretary, Joel Valdez.

You know what they say about those that protest to much…

Has Matt Gaetz announced that Joel Valdez is his son yet?

"Dude, you'd best change your vote, or I'mma spill the beans about what I saw you doing in the men's room with your press secretary Joel Valdez. And you can imagine what THAT'S gonna do to poor Nestor, let alone your 'wife' pal!"

Admit it, the most surprising thing about this new Matt Gaetz sex scandal is that it's with a consenting adult.

So it sounds like Matt Gaetz was caught having a sexual relationship with a male on his staff which gives me about a thousand new questions concerning his legally-adopted pool boy named Nestor.

Could this latest Matt Gaetz news about him having an affair with his male press secretary Joel Valdez possibly have been leaked by Marjorie Taylor Greene and Kevin McCarthy?

A little GOP on GOP revenge?

Things that make you go hmmm..?

The rumor is that Matt Gaetz has been having an affair with a male staffer.

Which is going to be heartbreaking to all those underage girls.@mattgaetz

It doesn't bother me that Matt Gaetz might be gay. It bothers me that he's a seditious piece of shit.

Let me get this straight. Republican Rep. George Santos is a drag queen. Republican Rep. Matt Gaetz is having an affair with a man while married to a woman & Republican Matt Schlapp sexually assaulted a male staffer & destroyed his marriage.

Come out, come out, wherever you are.

In his 2020 book Firebrand: Dispatches from the Front Lines of the MAGA Revolution, Gaetz wrote about how he “arrived in D.C. as a single man after a couple of long-term relationships that didn’t work out” and had to learn how to establish boundaries in his dating life to avoid any career-ending “sexual missteps.”

“I knew going in how many people had been brought down by sexual missteps in this town, so I set some rules to help me err on the safe side,” he wrote. “In Washington, safe sex means in part: no dating lobbyists, no dating your staff members, and I should have added no dating reporters, but I didn’t at first.”

Related: Matt Gaetz mocks women for being ugly, gets reminded he has huge forehead and (allegedly) pays for sex