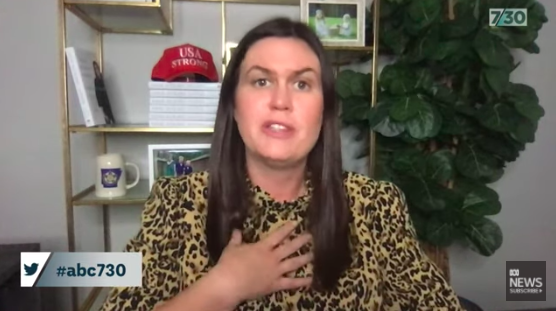 Sarah Huckabee Sanders is still out on the media circuit promoting her new book that nobody wants to read. This week, she sat down for eight excruciating minutes with Australian ABC TV anchor Leigh Sales and, let’s just say, things didn’t go so well for her.

Sales opened by asking the former White House press secretary, “Can Donald Trump tell the difference between the truth and a lie?” To which Sanders responded with her usual vague attacks on the media that everyone’s now heard approximately 4,897,382 times.

The first half of the interview is mostly just Sales asking tough, thoughtful questions and Sanders deflecting, evading, and occasionally gaslighting to weasel her way out of answering them.

Things got really weird, however, about five and a half minutes in when Sales pressed Sanders on how Donald “grab ’em by the p*ssy” Trump squares with her values as a Christian.

That’s when Sanders went on a truly insane tangent about how the only perfect candidate is Jesus Christ and, if she ever sees his name on a ballot, she’ll “be sure to vote for him!”

She then went on to say that she’s basically OK with lying to people and abandoning her faith to support a man who she says has been unfairly demonized “for the sin of winning an election.”

The interview is quite… something.