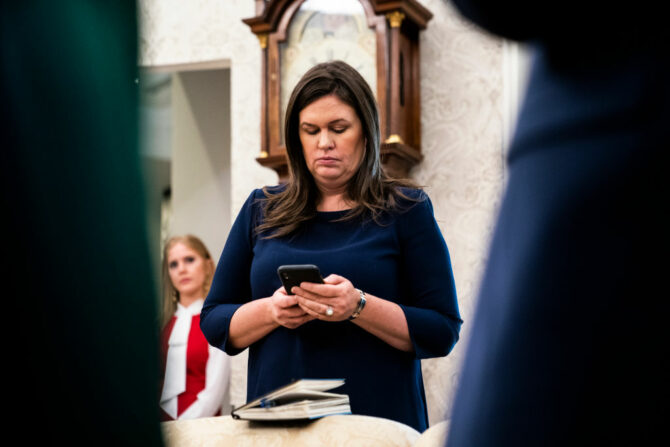 Sarah Huckabee Sanders has been trending all morning on Twitter after an article from December 2019 resurfaced over the weekend. It talks about how she mocked then-candidate Joe Biden for stuttering during the sixth 2020 Democratic presidential primary debate.

Stuttering. This often misunderstood disability affects over three million Americans. And despite decades of research, both basic and clinical, the causes are still largely unknown.

At the time, Biden responded to Sanders by tweeting: “I’ve worked my whole life to overcome a stutter. And it’s my great honor to mentor kids who have experienced the same. It’s called empathy. Look it up.”

I’ve worked my whole life to overcome a stutter. And it’s my great honor to mentor kids who have experienced the same. It’s called empathy. Look it up. https://t.co/0kd0UJr9Rs

Sanders, who is currently a candidate in the 2022 Arkansas gubernatorial election, later deleted the tweet and apologized for being disrespectful.

After the story resurfaced, people started tearing into her for mocking Biden’s speech disorder two years ago. Here’s what they’re saying…

Good morning to everyone except for Sarah Sanders because she’s a shitty person.

Sarah Sanders is trending because she made fun of President Biden’s stutter.

And that’s really all you need to know about Sarah Sanders.

If I was Sarah Sanders, I’d rather have a speech impediment than be completely incompetent at my job.

Sarah Sanders shouldn’t be making fun of our President or anyone else, I wonder how she’d feel if someone pointed out her lazy eye!

Sarah Sanders mocked Biden for stuttering and said nothing about when her dad, former Gov. Mike Huckabee, tried to squelch the news that her brother David hanged a stray dog at Boy Scout camp.

Pretty weird flex for Sarah Sanders to make fun of Biden for stuttering, when she is literally a human who appears to be part pig.

Sarah Sanders mocked Joe Biden for stuttering. She calls herself a Christian. Another one of her lies.

Sarah Sanders lied regularly to America. Her brother murdered a dog. Her daddy sold cinnamon as a cure for diabetes. Quite the creepy family.

So if Sarah Sanders thinks is copacetic to mock a persons stutter. I guess she won't be offended when, she's mocked for resembling a weeble wobble.

I went through speech therapy as a child and now speak for a living as an adult, so let me loudly and clearly say this:

Sarah Sanders always reminded me of a, Marie Osmond crazy fraternal twin, they kept locked in an attic most of her life.

While you’re here, watch Sanders get destroyed by Australian ABC TV anchor Leigh Sales while she was promoting her book “Speaking for Myself” last year.