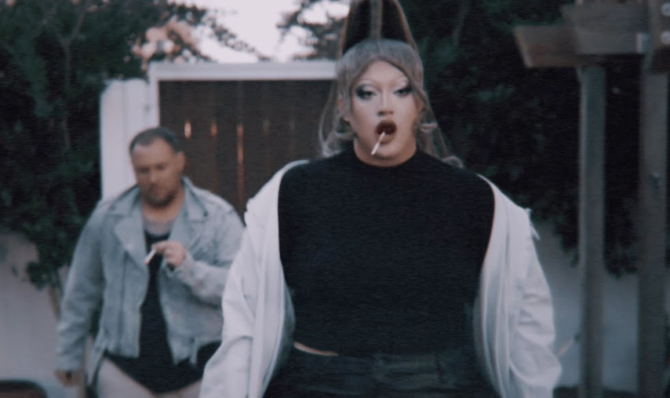 Actor and musician Hunter Reese Peña has something to say in his new music video, “Over California,” and it’s sure to rub some of his newfound audience the wrong way. We’re totally here for it.

In one of the series’ most poignant scenes, Ricky cries while watching Selena record his song about unrequited love, “No Me Queda Más.”

The scene brought Peña a new level of exposure, and with it a whole crop of new fans and followers. But while “Ricky” is straight and cis, Peña is anything but, and the love from some of his new fans turned to mocking, even calling him “disgusting” when he posted a video doing a Selena drag tribute to TikTok.

Rather than avoid the hate, Peña posted a video response which racked up 1.2 million views.

It’s with that same spirit that Peña has released his mostly self-funded music video for the song “Over California.”

“It was important to me to cast a trans lead for a cis role and also to do drag in my video. It’s my pseudo coming-out-as-me, as gender-binary-averse,” Peña tells Queerty. “I have a fear of getting shoved back in the closet by Hollywood politics as a cis-straight appearing man. I’ve been told countless times by friends and team members that being too open about my gender fluidity and sexuality might render me uncastable for certain roles. So this is my leap of faith that that’s no longer the case, that Hollywood will see my talent and versatility and choose to do better.”

“At the end of the day I think gender and sexuality are more complex than man/woman, gay/straight, it was a lesson that took me a lifetime to learn, and I hope I can bring what I’ve learned to more people.”