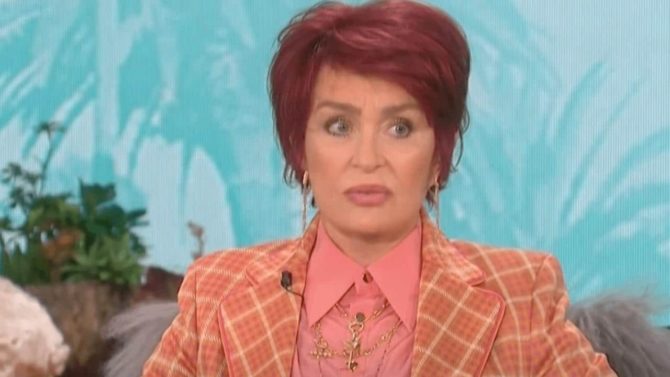 Talk show host Sharon Osbourne‘s week from Hell continues. Following her controversial comments about Prince Harry and Meghan Markle, Osbourne has found herself the target of a CBS investigation after allegations that she used homophobic and racist slurs when referring to her co-hosts. At the time of this writing, Osbourne’s show The Talk has gone on extended hiatus.

Vanity Fair now reports that journalist Yashar Ali uncovered and published a newsletter from one of Osbourne’s former co-hosts, actress Leah Remini. In it, Remini accuses Osbourne of using anti-Asian slurs when referring to another former co-host, Julie Chen. Osbourne also allegedly referred to co-host Sara Gilbert, who is a lesbian, with homophobic language.

“I mean, who the f*ck does slanty eyes think she is? She shouldn’t be pillow-talking with our boss,” Osbourne allegedly said of Chen, who is married to former CBS chief Les Moonves.

“Why won’t the p*ssy licker do anything about the wonton?” Osbourne allegedly said of Gilbert. “Why won’t the fish-eater be part of this discussion? She’s the f*cking executive producer.”

The resurfaced newsletter also follows comments by former The Talk co-host Holly Robinson Peete, who claims that Osbourne referred to her as “ghetto.” Robinson Peete claims the comments led to her getting fired after the show’s first season.

Osbourne’s camp has denied the allegations, of course. “The only thing worse than a disgruntled former employee is a disgruntled former talk show host,” said Osbourne’s publicist, Howard Bragman. “For 11 years Sharon has been kind, collegial, and friendly with her hosts as evidenced by throwing them parties, inviting them to her home in the UK and other gestures of kindness too many to name. Sharon is disappointed but unfazed and hardly surprised by the lies, the recasting of history and the bitterness coming out at this moment. She will survive this, as she always has and her heart will remain open and good, because she refuses to let others take her down. She thanks her family, friends and fans for standing by her and knowing her true nature.”

CBS, for its part, isn’t taking the charges lightly. The Talk went on hiatus earlier this week to undergo an investigation following charges of racism against Osbourne. The network had planned a two-day break in production to examine Osbourne’s defense of friend Piers Morgan, who himself faces charges of racism for decrying Prince Harry and Meghan Markle.  Osbourne had come to Morgan’s defense on The Talk, which culminated in a tense exchange with co-host Sheryl Underwood. Underwood tried to explain to a combative Osbourne that defending Morgan made her look as though she was defending racism. Underwood also underlined that she did not believe Osbourne was actually a racist herself.

However, following Ali’s publication of Remini’s newsletter, CBS has extended The Talk hiatus through March 23 pending further investigation. “CBS is committed to a diverse, inclusive and respectful workplace across all of our productions,” the network said in a statement. “We’re also very mindful of the important concerns expressed and discussions taking place regarding events on The Talk. This includes a process where all voices are heard, claims are investigated and appropriate action is taken where necessary.”

If CBS ends up looking for Osbourne’s replacement…might we suggest Meghan Markle?