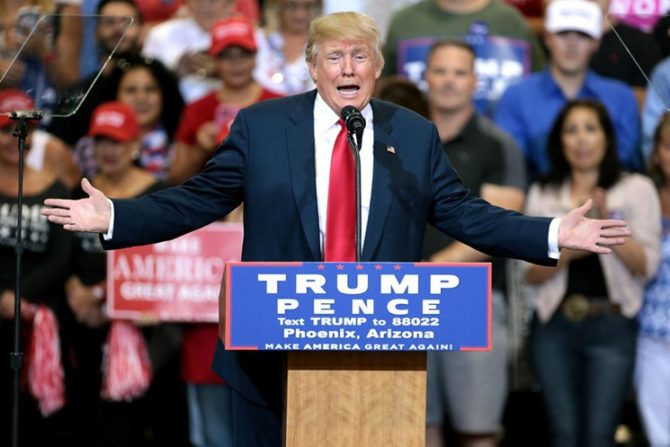 Did you watch Donald Trump‘s speech from Phoenix last night? No? That’s OK. You didn’t miss much.

Per usual, Trump spent much of his time attacking the “fake news” media and at one point accused CNN of shutting off its live feed (it didn’t). He also defended his response to the white supremacy rally in Charlottesville, which he blamed on “both sides,” and spent several minutes insisting he’s not racist. Oh, and he took aim at John McCain, who is currently undergoing treatment for brain cancer, for voting against the GOP’s ObamaCare repeal bill.

It was your typical unhinged, embarrassing, unscripted Trump hate speech. The only thing that made it semi-interesting were the live tweets.

Check out what people were saying…

A racist mobster elected President with the help of a Russian autocrat is giving a crazy speech in Arizona. #PhoenixRally

It's a shitshow of the highest order.

He's off the rails defensive.

At #PhoenixRally, my words & made up facts were perfect! That I can tell you. I looked mentally stable & didn’t look unhinged! Unbelievable!

is it too late to stare directly at the eclipse

Nothing good happens for this White House when he pulls papers out of his pocket.

I did the worst thing I could have done: watched clips from Trump's batshit crazy one-man Arizona show and then binged "Handmaid's Tale"

That moment when u can't get away from the loud drunk guy at the bar, then realize you're not at a bar. And he's president. #PhoenixRally

I mean, what did you all honestly expect?

So I watched Pres. Trump on CNN live tell the crowd that CNN has turned off the live feed of his speech.
I watched that on CNN.

Folks, this is not how a president behaves. This is not a president. We don't have one. We're leaderless. So frightening. #phoenix

If you need to explain and persuade to the American people for 45 minutes that you are not a racist….You are prolly a racist #PhoenixRally

Looking at live tweets of a Trump speech instead of watching the speech itself is my soul's eclipse glasses.