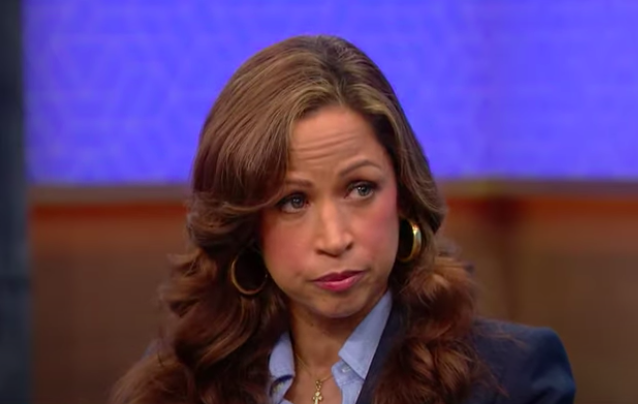 Former actress/Fox News pundit Stacey Dash went on Dr. Oz’s show this week to talk about her past addiction to prescription drugs and to claim she’s not a homophobe despite all those years she spent spewing anti-LGBTQ vitriol on television and social media.

On yesterday’s episode of “The Dr. Oz Show”, Dash shared her “deepest, darkest secret”, claiming she was addicted Vicodin, “taking 18 to 20 pills a day” at one point, and that’s what made her say such horrible things about LGBTQ people. It also nearly bankrupt her.

“I lost everything,” she said, claiming to have blown through “about five to ten grand” a month on pills.

“The greatest blessing is that not only have I been able to be honest with myself and become a better person,” she said, “I’ve been able to understand my parents and that they did love me and that they were doing the best they could and they were just sick. They were addicted.”

Now, we’re glad Dash was able to overcome her addiction and has found the courage to speak about it publicly. That definitely takes guts.

And we don’t mean simply saying “I’m sorry” and moving on like nothing ever happened. We mean actively working to build meaningful relationships with the communities you tried to harm and learning from them. That’s something Dash has yet to do or even express any interest in doing.

“I’m not homophobic,” she claimed. “I’m not racist. I was just angry, and it benefited me.”

#staceydash is doing the going through something tour…… @DrOz

I found your interview- self serving,

So she was clean the entire time she was backing Trump🤷🏽‍♂️

Vicodin Defense. Is she trying to rebrand herself now that Trumps gone?

Not Stacey Dash saying her republican rants were due to a pill addiction. I empathize with addiction but nah.

Being transexual is NOT AN IDENTITY CRISIS!!! You are still awful!

Wow…so she was sober during all of the recent political “stuff” she was pushing?!?! Oh….🤦🏾‍♀️

Anyone else watching this Stacey Dash interview on Dr. Oz? The republican checks must of dried up

Did you say transgender people have an “identity crisis?” Did I hear that right?

No true apology or responsibility taken for all of the mistakes you’ve made. Totally self serving interview. We don’t claim you, girl. You may be pretty but BYE ✌🏼

Subscribe to Queerty for a daily dose of #life #donaldtrump #dr.oz stories and more