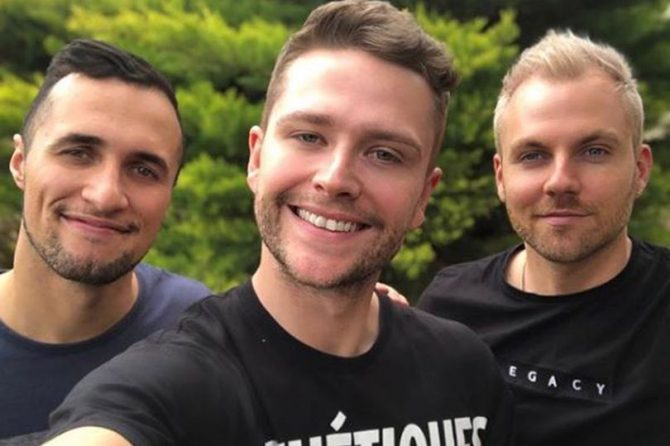 Thomas Fennemore and his partner Jonny were on holiday in Perth, Australia last May when they made eyes with a “gorgeous” stranger at their hotel.

“None of it was planned,” Thomas tell The Mirror.

“We were staying in the same hotel and came across him in the elevator and later logged into a local gay dating website to see if we could find him… and we did!”

Related: Frankie Grande dishes on being in a thruple, says “the triangle is the strongest shape”

“We thought it was just casual sex,” Thomas explains, “but it turned into a lot more than that.”

A whole lot more than that.

“We all had this underlying feeling that it would progress into something more,” Thomas says, “but none of us said it at first.”

“After Jonny and I saw Anthony again in July, we agreed we both liked him. It was weird when we admitted it, but communicating helped. By August 2018 we asked him if he wanted to date us.”

Anthony says he was just as surprised as Thomas and Jonny when he caught feelings for the two of them.

“At first, I was surprised they wanted me to date them, as it started as just casual sex,” he says. “But we spoke so much on the phone and when we met in person again the excitement only grew.”

“I’ve never been polyamorous before either and it never crossed my mind,” he continues. “I’d be lying if I said I didn’t expect it to be difficult, but it’s been smooth and we’re all happy.”

Thank you to my boyfriends @jmwarren85 and @anthonyliberto for an amazing weekend away for my birthday! ??? – – – #throuple #boyfriends #birthday #weekend #melbourne #love #grateful #gay #gayboyfriends #instagay

Now, the trio is considering the next steps in their relationship, which may include marriage.

“We haven’t had issues or arguments, so I can’t see a break-up looming,” Thomas says. “In fact, always having a third person makes little bickers easier to get over.”

“If either of us argue with each other, there’s always another person to go to and ask for help, or just a person to mediate and calm a situation, which works perfectly.”

“We all fulfill each other’s different needs and this is a new and exciting time,” Jonny says. “Luckily for us, it truly worked and we’re excited to see the next chapter of our lives.”

Related: Frankie Grande “feeling strong and confident” after thruple breakup, ready to meet his next soulmates