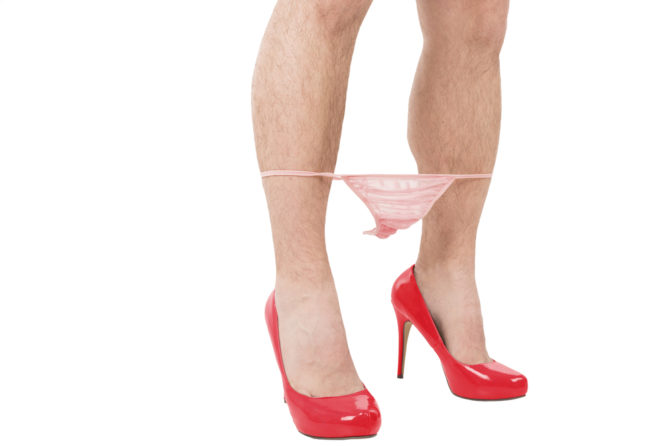 A fascinating new article by Metro UK takes a deep dive into transvestic fetishism and the straight and bisexual men who partake in it.

(Just to be super duper clear, a transvestite is someone who enjoys dressing in clothes primarily associated with the opposite sex. Contrary to what some Republicans believe, it’s completely different from being transgender, which is when someone’s personal identity and gender doesn’t correspond with their birth sex.)

He continues, “For me, it starts and stops at lingerie. I’ve no interest in dressing as a convincing woman and men completely dressed as women don’t rev my engine. But being in lingerie or being with a man dressed in lingerie can be incredibly arousing.”

Liam says part of the appeal is the way a dude looks in women’s underpants (“Most men’s underwear is boring, functional or plain ugly. Women get all the beautiful things!”) and part of it is the way the garments feel (“there’s the feeling of lingerie etc against the skin”).

“For those with no such interests, I imagine it must look comedic, ridiculous or simply wrong,” he says, “but everyone’s entitled to their opinion.”

Related: This innocent question about fetish gear is absolutely hilarious

Then there’s Noel, who is married to a woman and who identifies as straight.

“As far as anyone knows, I’m a conventional, married, heterosexual, sexually unadventurous man,” he says. “My secret is that I like women’s panties.”

“I’m a fit, athletic masculine guy so I love the way my hairy, muscled body contrasts with the femininity of my underwear,” he continues.

Noel says his wife knows about his naughty little secret and finds it hot as well.

“What she doesn’t know,” he adds, “is that I also get turned on by looking at pictures of other men in panties, and of sharing pics of myself online.”

For years, I had a secret Twitter account where I shared pictures of myself in panties and followed other similarly-minded men. It started to become a bit compulsive and the guilt got the better of me so I deleted the account and tried to give it up… I still have the occasional lustful look though. Many people, I think, would be astonished at how many conventional straight men like me are a) wearing panties regularly and b) getting off at looking at other men in panties.

Noel says he hasn’t engaged in any physical homosexual activity… yet. Though he admits “the temptation is strong.”

“I fantasize endlessly about playing with another man, trying on different pairs, and stroking each other,” he says.