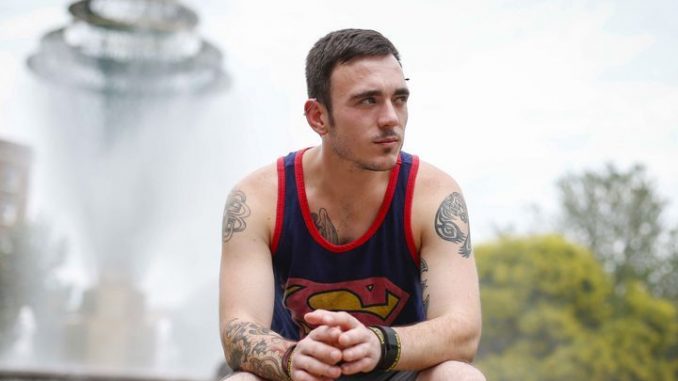 “One of the worst things about recovery is that it’s incredibly lonely,” 25-year-old Caleb Byers tells the Des Moines Register. “It feels like nobody will ever understand, because apparently nobody else has been through it. But they have, they just don’t talk about it.”

Five years ago, Byers, who identifies as straight, stopped by a friend’s house for a visit. The friend was an older gay man who he viewed as a father figure. Up until then, 20-year-old Byers and the 60-year-old man enjoyed a plutonic friendship, and he would often turn to him for advice and guidance.

During this particular visit, however, things felt different. As soon as he arrived, the man gave Byers a glass of Bacardi 151 and sat down beside him. They got to chatting. But soon, he started inching his way closer to Byers.

Feeling uncomfortable, Byers excused himself to the bathroom. When he returned, the man was waiting for him, half-naked. He grabbed a hold of Byers, forcefully ripped off his clothes, and started “kissing me and biting me and rubbing my body,” Byers recalls.

According to a police report, he then proceeded to perform oral sex on Byers against his will, and made him touch his body. Byers described his assailant as being “taller and stronger” and “overpowering” him.

Looking back, he says he felt “frozen and detached” during the attack, and he was afraid to fight back for fear of only making it worse.

“I remember laying there just praying that this wasn’t happening to me,” he remembers. “This can’t be real. This has to be some kind of f*cking nightmare.”

Halfway through the encounter, Byers managed to escape to the bathroom, where he quickly got dressed and fled the house.

“For the second half (of the assault), I was trying to figure out what I could do to get out of there, and an idea hit me and I was like, ‘I have to go to the bathroom,’” Byers recounts. “I grabbed my clothes and just ran. I shouldn’t have been driving.”

According to a 2017 report by the CDC, nearly one in six men has experienced “contact sexual violence” during his lifetime. Many of the assaults go unreported, experts believe, due to ideas around masculinity and sexual assault.

When Byers reported the assault to police, he says he was bombarded with humiliating questions–“Are you sure you’re not just gay?” “Why didn’t you push him off?” “Why did you let him make you drinks?” “Are you really sure it happened?”

“It was traumatic telling my story to people who I could tell really didn’t believe me or who were skeptical, at best,” he says.

Ultimately, the case was closed for a lack of evidence. And, as a result of the experience, Byers says he suffered from PTSD and depression. He cut himself and frequently had suicidal thoughts, resulting in at least one hospital stay.

Today, Byers says he has worked through many of the issues stemming from his assault. He lives with his long-time girlfriend and is finishing up work on a Master’s degree. He hopes by sharing his story, he can help other men who have survived sexual violence.

“The biggest thing I can tell people is don’t suffer in misery, don’t self-destruct,” he explains. “I did that for months and it almost killed me.”

He adds, “We all have our past, but it doesn’t have to define us. We can become better and be better and do good things because of it.”

“We can move from victim to survivor. I did.”

Watch Byers share his story in the video below…