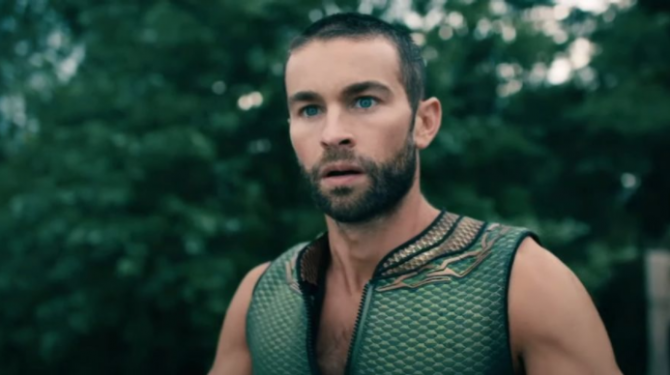 OK this is a bit of a trick question, because viewers of the hit Amazon series The Boys knows that few of the super-powered action stars in the show could possibly be called ‘heroes’.

That being said, The Deep himself — actor Chace Crawford — has opened up about his humble beginnings which could have seen him gyrating on a Chippendales stage if only he’d played his cards right.

Crawford appeared on The Tonight Show earlier this week, where host Jimmy Fallon asked him if it was true that he was offered a gig to be a stripper at Chippendales.

“That actually is a true story,” Crawford replied. “That was probably back in the first iPhone days.”

“I’ve never gotten to fully tell [the story],” he continued. “I did turn it down. I lived in New York, it’s cold, I liked to work out at the gym in my building. Usually, no one is ever up there, except this one guy, he would always be up there, you know, smelling good, tight clothes. I thought he was a trainer.”

Related: 10 movies about male strippers to quench your thirst during quarantine

The mystery man asked Crawford if he was a “model type,” to which the former Gossip Girl star responded: “I’m kind of like a work-out-alone, no-conversation type.”

Zing! Those are the kind of one liners that make us tune into the Tonight Show every night. Right?!

“I’m teasing, he was very nice. He asked me for some headshots…which I usually carry with me to the gym but didn’t have them that day. He goes, ‘Hey, I do this boot camp if you’d like to try out for Chippendales.’

“This was pre-Magic Mike days. I really messed up, I should’ve done it.”

And judging by this revealing photoshoot, he’d have a lot to show off.