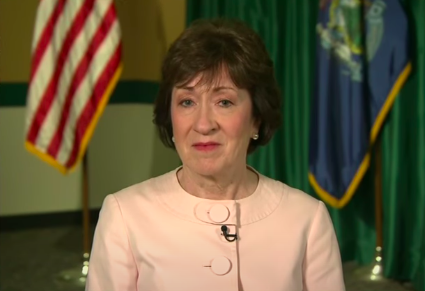 The Human Rights Campaign just endorsed her opponent, Maine Speaker of the House Sara Gideon, in the 2020 election, marking the first time the LGBTQ rights group has endorsed one of Collins’ opponents instead of her since 1996.

For nearly 25 years, HRC has backed Collins, citing her more moderate stances on LGBTQ issues, like her support for the repeal of the “Don’t Ask, Don’t Tell” policy. In 2014, it went so far as to praise her for playing a “pivotal role in advancing support for LGBT equality.”

However, in its new endorsement of Gideon, who clinched the Democratic nomination Tuesday night, the group excoriated Collins’s failure to buck President Trump in the Senate and her vote to confirm Supreme Court Justice Brett Kavanaugh. Her vote to confirm Kavanaugh, who was accused to sexual assault during his confirmation process, made her a major Democratic target for 2020.

In a statement, HRC President Alphonso David said, “We are fighting for our lives and the only way to advance LGBTQ equality through the United States Senate is to install a new pro-equality majority leader and replace Mitch McConnell.”

“Despite Susan Collins’ record of support on certain key LGBTQ issues, her support of Mitch McConnell and Donald Trump’s agenda, endorsement of Brett M. Kavanaugh’s appointment to the Supreme Court and failure to hold Donald Trump accountable, is simply untenable.”

David went on to praise Gideon for her “pro-equality leadership” in the Senate, specifically her support for the Equality Act, saying she will “live up to the principles of our democracy.”

.@SaraGideon will support pro-equality leadership in the Senate that will help us move our country forward by passing the #EqualityAct & live up to the principles of our democracy. Read more about @HRC's latest round of Senate endorsements: https://t.co/lRSOaLAPuY

Though Collins has not issued any comment on losing the HRC’s coveted endorsement after nearly a quarter of a century, sources say she is “very concerned” and “thinking deeply” on how to proceed with her all but doomed reelection campaign.