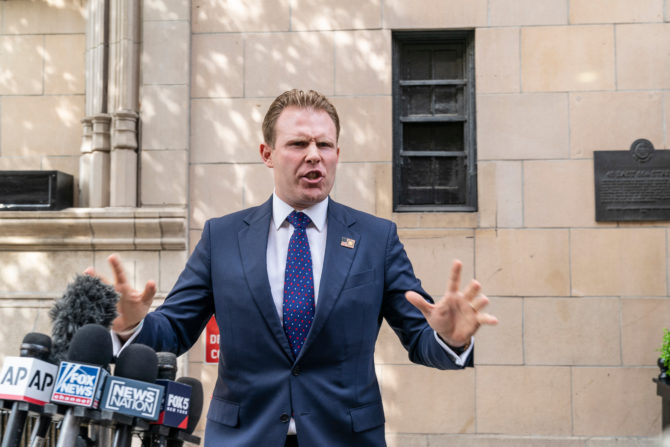 Andrew Giuliani — yeah that Andrew Giuliani. He’s Rudy Giuliani’s kid. You know, the one who made $95,000 a year to act as the Trump administration’s “liaison to the sports community.” Now he wants to parlay that invaluable experience into becoming the next governor of the state of New York.

On Tuesday the 35-year-old announced his candidacy in the 2022 election. He’ll run for the GOP nomination in a bid to take the governorship from Democrat Andrew Cuomo, who has become tangled in multiple scandals involving sexual harassment and misreporting of nursing home Covid-19 deaths.

Giuliani told CNN he’s running “for all New Yorkers,” but given his close ties to Trump and, well, his father, that might be a lost argument on many New York residents.

If his campaign is anything like this wild appearance on TV defending his dad last month, it should make for quite the show.

During a wild 10-minute back and forth with Erin Burnett, Andrew looked less-than-dignified as he deflected questions, hurled accusations, and rattled off conspiracy theories, including one about the judge who signed the search warrant for the raid on his father’s home.

“Who appointed the judge?” Andrew asked Burnett. “President Barack Obama! You have an Obama-appointed judge who has signed this warrant where no other judge would sign this warrant!”

To which the CNN host countered, “You have proof that no other judge would sign the warrant?”

He did not, of course.

Twitter had a lot to say about Andrew throwing his hat into the ring:

I would be a better NY Governor than Andrew Giuliani, and I’ve never lived in NY a day in my life.

Andrew Giuliani is running for office and Rudy filed the paperwork, which can only mean one thing: Andrew Giuliani will be the next governor of New York Sports Club.

Andrew Giuliani begins his campaign with irrevocable distinction of being the only candidate for NY Governor to ever be played by Chris Farley. https://t.co/hr1bkwA36N https://t.co/IQ6fMOUZBJ

Andrew Giuliani is the only candidate I can for sure beat in a governor's race.

Republicans select the next SC Justice giving them 7-2 majority

Register to, and vote in 2022 if your life depended on it…….it conceivably may. Who thought trump would win?

Will Andrew Giuliani be campaigning at the Four Seasons Total Landscaping?

I’m old enough to remember when people had records of having accomplished something in life before running for a high position like New York governor. Now we have Andrew Giuliani, who wants to be governor and has a record of having done absolutely nothing.

Andrew Giuliani is running for NY Governor on the coattails of his father’s “America’s Mayor” legacy.
He must have forgotten that any of Rudy’s credibility that was left leaked out of his head on national tv.