It was a moment for the books. Dirty trickster Roger Stone in shackles after a 6 am FBI raid on his Fort Lauderdale home.

Robert Mueller’s indictment of the diabolical Stone brings the special counsel’s investigation tantalizing close to the president himself. The indictment alleges that a senior campaign official ordered another official to contact Stone to find out more about what Wikileaks might have in store for the Clinton campaign. This has triggered endless speculation about whether the senior official was Trump himself.

Stone has denied the charges, in his usual grandstanding style. But, no matter the outcome of his current legal problems, Stone has been a blight on the body politic since the Nixon era.

There are plenty of shadowy figures, like Stone, who practice the dark arts of political trickery, many of them close to Trump. But Stone stands apart. “He is the wicked seed who has poisoned the tree of democracy,” Democratic strategist George Arzt told Politico.

Stone also happens to be a swinger who is by his own description a “trysexual.” Stone and the woman he was married to at the time were discovered posting ads 20 years ago advertising “Hot, insatiable lady and her handsome body builder husband, experienced swingers, seek similar couples or exceptional muscular… single men.”

Stone won’t quite own any sexual identity–he’s on his second marriage to a woman–despite his treks to New York, D.C., and Fort Lauderdale gay bars. But his well known sexual forays (which cost him at least one job, as an aide to Bob Dole) are of a piece with his personality in that he sees them as transgressive rather than part of the identity of an adult who is responsible to a community of like-minded people.

He told The New Yorker in 2008 that he’s not a hypocrite. “I’m a libertarian and a libertine,” he said. (One interview for the story was conducted in a swingers’ club that Stone chose, and the article featured him shirtless.)

Stone is part of a cabal of hypocritical men who have sex with men–not really gay men in the sense that they don’t identify with the rest of us–who enabled Trump’s presidency and who have contributed to some of the lowest points in modern politics. It’s not by accident that Stone was introduced to Trump by Roy Cohn, Trump’s attorney and the evilest men in American history. Cohn, whose villainy is immortalized in Angels in America, happily ruined countless lives as one of Sen. Joseph McCarthy’s henchmen 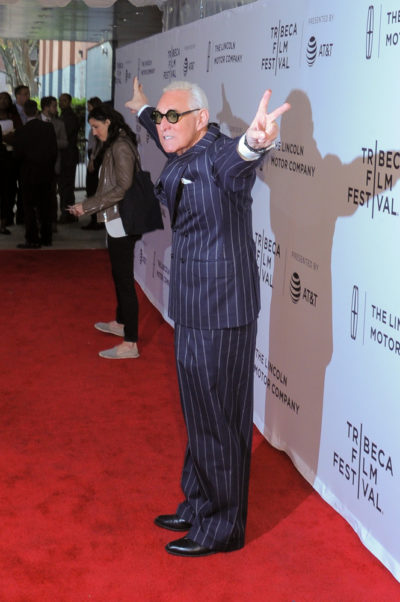 and moved on to become a moral-free lawyer defending mobsters.

Stone’s career doesn’t quite reach Cohn’s depths, but it’s not for want of trying. He began engaging in dirty tricks for the Nixon campaign while still in college and has such an affinity for the disgraced president that he has a tattoo of Nixon on his back. Stone became a youth coordinator in Ronald Reagan’s 1976 campaign and then head of Reagan’s Connecticut operations in 1980. It was through that effort that he met Cohn.

“Roy was not gay,” Stone told The New Yorker. “He was a man who liked having sex with men. Gays were weak, effeminate. He always seemed to have these young blond boys around. It just wasn’t discussed.”

After the 1980 election, Stone started a political lobbying firm with fellow Mueller target and convict Paul Manafort, as well as Lee Atwater, the man behind the notoriously racist Willie Horton ad attacking Michael Dukakis (which Stone also had a hand in). Throughout the ’80s and ’90s, Stone cultivated an image of a rogue dandy, down to the watch fob and tailored suits.

Stone was also happily engaging in the swingers’ scene. When word of his ads got out, in 1996, he had to quit his job on Bob Dole’s presidential campaign. Stone blamed the ads on a dirty trick but later acknowledged that they were genuine. Ironically, the story was broken by The National Enquirer, which has been doing Trump’s bidding for decades.

Stone was something of a has-been when he latched onto the Trump campaign. With its collection of hacks, grifters, and crazies, the campaign proved a perfect venue for Stone to do what he does best: sow even more chaos.

He was dropping broad hints throughout 2016 that he knew a lot about what Wikileaks was up to, daring reporters (and investigators) to call him out on it. Most famously, he predicted that it soon would be Clinton campaign chairman John Podesta’s “time in the barrel.” Shortly thereafter, Wikileaks dumped Podesta’s stolen emails.

This time, Stone may have finally gone too far. He seems to think that he’s living through a real-life version of The Godfather, especially the mob’s code of silence. (The president seems to subscribe to the same code.)

The constant drip of revelations keeps obscuring the big picture. Stone is being accused of knowingly working with a hostile foreign power to release stolen goods in order to secure the presidency for Stone’s client. That’s an allegation that makes Watergate look small by comparison.

It’s also something that would have made Roy Cohn proud of his disciple.