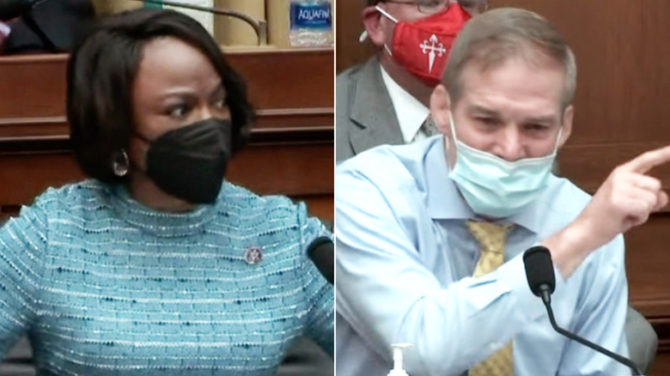 Rep. Val Demings of Florida was not having any of Rep. Jim Jordan of Ohio’s rudeness when he tried interrupting her during a House Judiciary Committee hearing on a new hate crimes bill yesterday.

Demings, the former Chief of the Orlando Police Department, was in the middle of criticizing what she called a “completely irrelevant” amendment Republicans tried to sneak in to prevent defunding of police departments.

“I served as a law enforcement officer for 27 years,” the congresswoman said. “It is a tough job, and good police officers deserve your support. You know, it’s interesting to see my colleagues on the other side of the aisle support the police when it is politically convenient to do so.”

That’s when Jordan interrupted her, prompting Demings to slam her hand down on the table.

But she wasn’t finished yet.

“Law enforcement officers deserve better than to be utilized as pawns, and you and your colleagues should be ashamed of yourselves,” she added.

Last week, Jordan got into a similar screaming match with Rep. Jim Clyburn of South Carolina and Rep. Maxine Waters of California during a hearing about the coronavirus with Dr. Anthony Fauci.

Jordan ignored objections from Clyburn by continuing to shout rude questions at Fauci when it wasn’t his turn to speak, prompting Waters to step in and tell him to “shut your mouth.”

Perhaps Jordan should focus on that college wrestling/gay sex abuse scandal of his rather than constantly disrespecting his Black colleagues. Just a thought.

And now, the reactions…

Val Demings didn't come to play… She came to slay ??

Val Demings ended Jim Jordan and I am so here for it.

Val Demings is my Shero!

Rep. Val Demings is missing a shoe because it’s in Jim Jordan’s ass.

Rep Maxine Waters and Rep. Val Demings have more courage than all of men in the Democratic Party combined when it comes to live schooling the Republican Q-Nuts like Jim Jordan.

Rep. Val Demings just shut down Jim Jordan during a hearing and the world is better for it.

Did anyone else take pleasure in watching Val Demings ripping another asshole in Gym Jordan??

Jim Jordan got bodied by two Black women, Maxine Waters and Val Demings, this week and it was so satisfying pic.twitter.com/lHIG5bTOqW