The Step-Out: I Carry You With Me

Director Heidi Ewing’s much-acclaimed drama finally opens wide this week, providing a beautiful and uplifting tale to close out pride month. I Carry You With Me uses an unusual documentary-narrative hybrid to tell the story of Ivan & Gerardo (Armando Espitia and Christian Vázquez), a gay, Mexican couple with big dreams of moving to the US, albeit illegally. There’s just one problem: Ivan has a son from a previous relationship. A return to Mexico could mean separating the couple forever, or worse—prison or forced deportation. But can the couple ask a son they barely know to come to the US?

Ewing, in her narrative debut, proves herself a gentile and empathetic director. The film doesn’t make any didactic statements about the current migration crisis in North America. For Ivan and Gerardo, who emigrated some 20 years ago, a lack of a legal asylum process and the threat of violence forced them to leave immediately. The love of the couple provides a tender anchor to the story, and both Espitia and Vázquez give credible, passionate performances that make us cheer for the pair. It’s a beautiful and humanizing look at an ongoing mess, with a delicious dash of gay thrown in.

Romance novelist Jackie Collins—sister of Dynasty’s Joan Collins—became a household name in the 1980s thanks to her lurid bestsellers which focused on beautiful moneyed women having a whole lot of sex. Go figure that Collins built up a gay fanbase as well, both for her visions of glamour and female empowerment…and for their campy salaciousness. Lady Boss brings Collins’ personal life to the fore, recounting her abusive childhood, her own attempts at an acting career (not to mention the plastic surgeries she endured to further her casting prospects) and her coming of age amid Hollywood’s elite. The portrait that emerges portrays Collins with a new level of intelligence and business savvy, someone unafraid to write veiled versions of her celebrity friends into characters—a key to her bestseller status. She also became something of a sex instructor—including, yes, the ways of gay sex—at a time when the subject remained taboo. Compelling, fun and very entertaining, we suggest spending an evening with Lady Boss for one simple reason: the real-life Jackie Collins is the greatest character she ever created.

The Event: Billy Porter hosts 5B

Queer titan Billy Porter celebrates pride this weekend by hosting a special screening of the documentary 5B. For those who remember, we actually named 5B the best film of 2019; that it went totally overlooked on the awards circuit still infuriates us. The film tells the story of the first AIDS ward in San Francisco, as recounted by the brave activists and health professionals that worked there. The film also recalls the ugly fight over how and if AIDS patients should even receive treatment, chronicling lawsuits by doctors and nurses to refuse to work with AIDS patients and the political battles that followed.

The story of 5B also echoes current debates over a certain other viral plague, its treatment, the duty of healthcare providers, and the political demagogues that want to use it as a wedge issue. For that reason, Porter will host a special panel discussion following the film to discuss how AIDS foreshadowed the COVID-19 crisis, heath disparity gaps, and what LGBTQ people can do to bring more equity to healthcare. From where we stand, 5B should be required viewing for every queer person alive. That Porter and company have put together a super-relevant context in which to show it only underlines that distinction.

Streams online June 24. Anyone wishing to participate can register for the event.

The Party (in the USA): Miley Cyrus’ “Stand By You”

Miley Cyrus celebrates pride with this special concert, featuring performances by Brothers Osborne, Mickey Guyton, Little Big Town, Maren Morris and Orville Peck. Even better, Ms. Cyrus has vowed to cover a number of gay anthems as part of the show, including Cher’s “Believe,” Madonna’s “Express Yourself,” Cyndi Lauper’s “True Colors” and ABBA’s “Dancing Queen.” For anyone unfamiliar with Miley’s recent cover songs, the woman has proven herself both a consummate vocalist and energized performer. Count on more of that here, amid a beautiful tribute to the queer community.

The (Mickey Mouse) Clubhouse: Disney’s “This is Me” 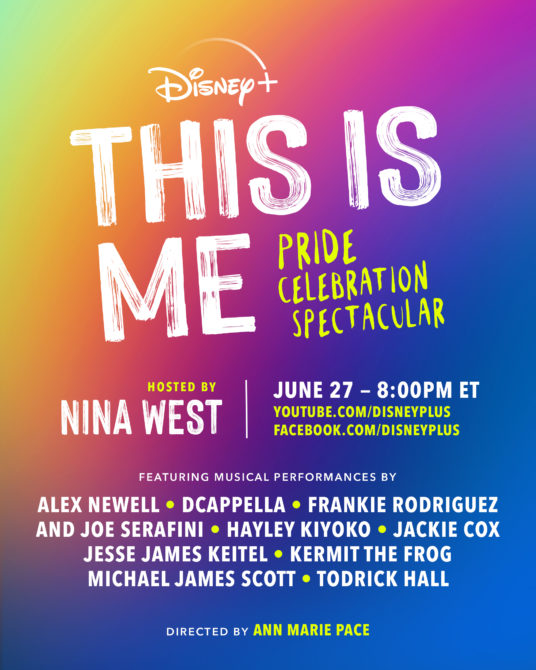 Also getting in on the pride game this week, streaming service Disney+ launches its own celebration hosted by Drag Race alum Nina West. “This is Me” features a broad array of talent, including Frankie Rodriguez and Joe Serafini (High School Musical: The Musical: The Series), Hayley Kiyoko, Todrick Hall and Kermit the Frog performing selections from (where else) the Disney song catalog. It’s a zip-a-dee-doo-dah-way to celebrate pride at home with or without a pair of rainbow Mouseketeer ears.

With the pandemic finally on the wane, we’re happy to announce that Universal Studios Hollywood will welcome the return of its annual pride night festivities this year. Guests attending the event can enjoy the park’s many attractions beginning at 4pm. At 9pm, the studio goes marvelously queer with a series of special events including a dance party featuring DJ Brynn Taylor and a drag show featuring Drag Race alums Morgan Michaels, Delta Work, Kimora Blac, Aiden Zhane and Nicky Doll. It’s a great way to show your rainbow, meet new people and return to public life.

The Sip: The Jackie Collins 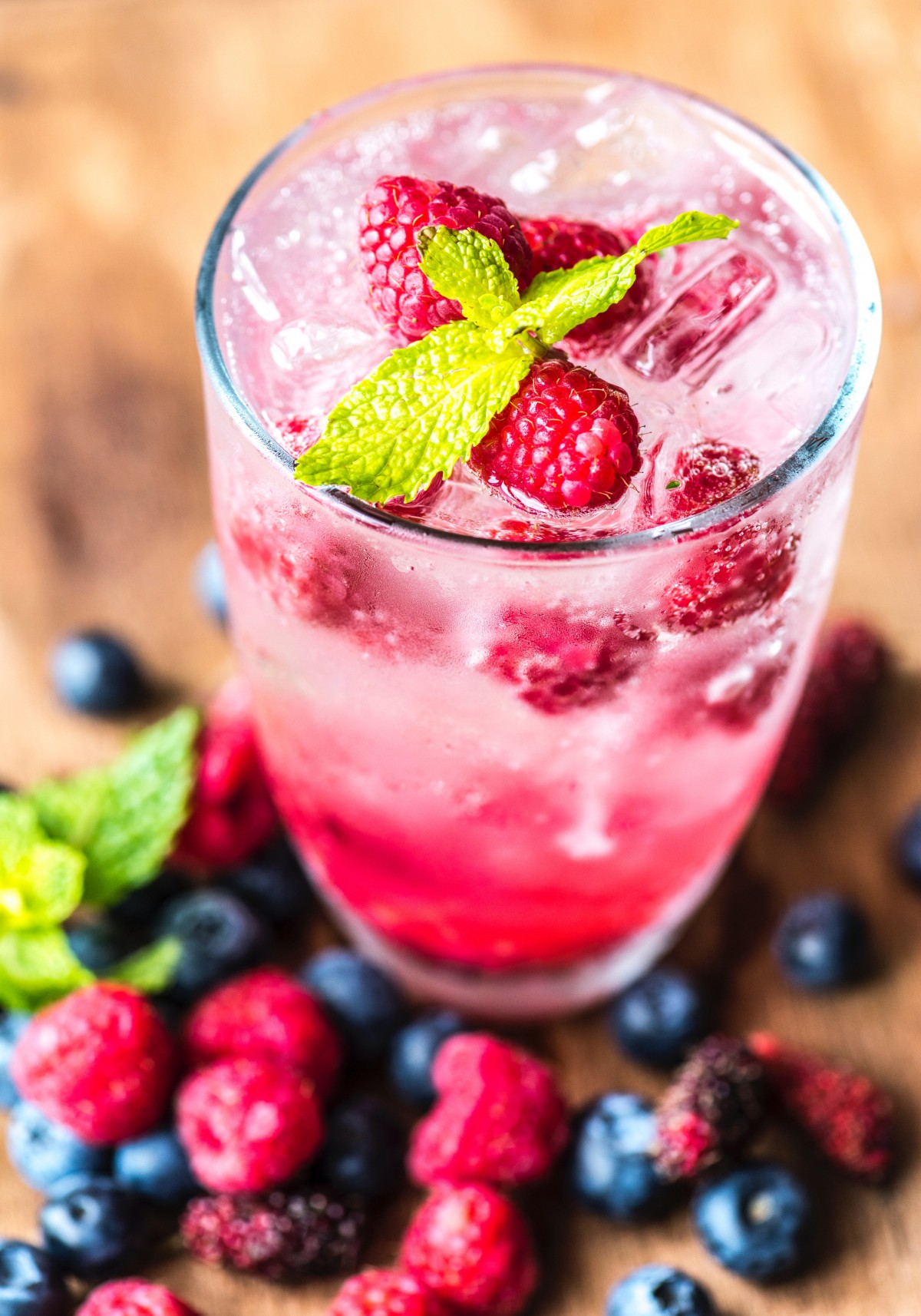 In honor of our newfound interest in the ever-scandalous Ms. Collins, we suggest this week’s libation so-named for the novelist, and developed by Wolfgang Puck no less. It’s a clean, sweet and fizzy concoction perfect for a summer afternoon…with or without one of her books on hand.

Crush berries in a glass with simple syrup. Mix vodka, lime juice & lemonade in a cocktail shaker. Shake, and pour contents into the glass with berries. Top with club soda.