The Step Out: Bombshell

Jay Roach (Austin Powers) directs this fictionalized expose of the fall of Roger Ailes and the toxic climate of Fox News. Charlize Theron, Nicole Kidman, Margot Robbie and John Lithgow star, in a movie where much of the dialogue remains unspoken, and the provocative questions the film raises, don’t have real answers. Were harassed women like Gretchen Carlson (Kidman) and Megan Kelly (Theron) complacent—or worse, encouraging—of a toxic work environment? Do they realize how damaging the “infotainment” of Fox is to American political dialogue? No doubt the issues raised in Bombshell will infuriate just as many viewers as they will impress (we’re in the latter camp). Regardless, the film features a moving storyline involving a lesbian Fox employee (Kate McKinnon, splendid in a dramatic role) and one of the year’s best performances by Theron, who captures all the buried fragility and icy cunning of Kelly.

Speaking of the best performances of the year, Renee Zellweger’s wonderful turn as Judy Garland arrives on streaming services this week, bringing with it all the glitz and glory of the mother of all queer icons. Judy suffers from some implausible situations and historical inaccuracies, but manages to rebound with gorgeous production design, impressive musical sequences and fine performances, led by Zellweger in one of her best turns. Besides, it’s about damn time a movie acknowledged Judy Garland’s relationship with her LGBTQ fans. Though not a great film, Judy does have enough greatness to warrant a watch.

The Legit: A Snow White Christmas

Out actors Neil Patrick Harris, Garrett Clayton and Jared Gertner headline this holiday extravaganza in the style of British pantomime. For the uninitiated, that involves a theatrical performance where the audience is encouraged to laugh, cheer, boo and interact with the performers. Christmas comes to the far off kingdom of Snow White (Olivia Sanabia), who teams with her famed dwarf friends to escape the clutches of the Evil Queen (Michelle Williams, of Destiny’s Child). It’s squeaky-clean fun for everyone, and a chance for thesps Harris, Clayton and Gertner to shine in their element.

Writer/director Nick Borenstein helmed this short film about a gay man on a Bar Mitzfah shopping trip with his neurotic mother to the 99-cent store. 99 played film festivals all over the country this year, including Tribecca, Frameline and Outfest to the delight of audiences who reveled in the all-too-familiar relationship between mom and her gay son. Besides, with the holiday season descending on us all, 99 feels all too appropriate given the times. Queerty managed to snag the exclusive premiere of the movie, which arrives on streaming platforms this week.

The Rise of Skywalker hits theatres next week, closing out the Skywalker sequel trilogy, and, no doubt, sending toxic fans into a frenzy. For a slice of something both nostalgic and utterly weird, look no further than YouTube to find this curio from 1977. Mark Hamill, Harrison Ford and Carrie Fisher are all on hand, as are Diahann Carroll (as a porno hologram), Harvey Korman, Art Carney and Bea Arthur (as a lesbian barkeep) in an epic adventure about Chewbacca trying to return to his homeworld for Life Day (the Wookie equivalent of Christmas). No description could ever capture the utter strangeness of the plotting of The Star Wars Holiday Special. George Lucas once vowed to destroy every bootleg copy with a hammer. Carrie Fisher also once demanded Lucas give her a copy in exchange for recording commentary for the original trilogy. Oh, and it’s a musical! Somehow hideous and hilarious, it should be required viewing before any Star Wars film.

Anyone needing some naked men with their holiday cheer–and let’s face it, who doesn’t–look no further than Shared Rooms, the delightful romantic comedy about a group of queer friends during the holiday season. The plot revolves around hook-up turning serious, a roommate arrangement that masks hidden feelings, and a happy married couple taking in a young, gay ward. Oh, and the film features no shortage of full-frontal nudity from actors Justin Xavier and Alexander Neil Smith who spend most of their scenes totally naked. So, there’s that. No doubt many of us will relate to the woes and joys of the characters as they search for love and happiness during the holidays.

The Sip: The Chewbacca 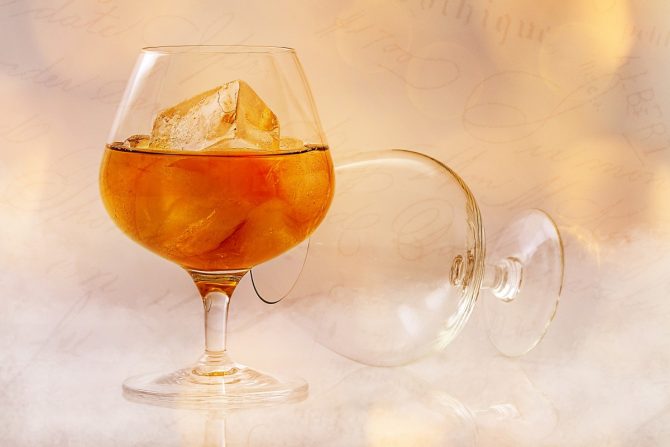 In honor of Chewie’s sojourn to his family for Life Day, why not sip on this sweet whiskey drink. No doubt it will also help quell the disgust raised by Fox News, or help you sing along to the tunes of Judy.