The Queer & Fuzzy: Better Nate Than Ever

Tim Federle’s Lambda Literary Award-nominated novel gets the big-screen adaptation, with the author himself taking over the director’s chair. Better Nate follows the adventure of Nate (Rueby Wood), a 13-year-old theatre enthusiast with dreams of starring in a Broadway musical. After not making the cut of his school musical—yet again—he has his hopes sparked by an upcoming casting call for Lilo & Stitch: The Musical in New York City. Nate and his good friend Libby (Aria Brooks) hatch a plot to run off to New York to make the big audition, leaving Nate’s older brother Anthony (Joshua Bassett) to track them down.

And, of course, the movie is a musical.

Better Nate Than Ever plays with a joyful effervescence that will delight theatre kids of all ages. No doubt, many a reader of Queerty will identify with Nate’s passion, and young Rueby Wood brings such sincerity to the character that we found the movie irresistible. Federle has no doubt studied the work of John Hughes, and Better Nate plays like a much cleaner, sweeter version of Hughes at his best. The film also takes the bold step of portraying a 13-year-old as aware of his budding queerness. Wood and Brooks have a tender scene together where Nate shows Libby his self-awareness, and does his best to explain his feelings of friendship to her. We can’t recommend the film enough: this is the kind of kiddie adventure we wish we could have had in adolescence.

The Timely: How to Survive a Pandemic

Filmmaker David France returns with this semi-sequel to his Oscar-nominated documentary How to Survive a Plague. In Pandemic, France chronicles the COVID-19 pandemic from its earliest days to the present. As you might guess, that involves a lot of discussion of masks, vaccines, boosters, social distancing and the usual terms that have become part of the vernacular in the past two years. France, however, tries to contextualize the bizarre politicization of the virus, and the oft-contradictory edicts coming out of the Trump White House.

How to Survive a Pandemic is at its best when France uses his access to maximum effect. An early conversation with Dr. Anthony Fauci finds the infectious disease specialist exasperated and perplexed by the White House response, at one point describing how Trump aids wouldn’t let him give any bad news to the then-President. France also does an excellent job of highlighting the international effects of COVID, traveling to China, Africa and beyond to show that while anti-mask protests cluttered the streets of the US, people abroad suffered the worst effects of the disease. For a public exhausted after two years of COVID, How to Survive a Pandemic might seem like the last thing to watch. France’s insight, however, will remind viewers that the crisis is far from over, and that while Americans squabble over boosters, COVID continues to ravage the world’s less affluent nations.

The Return: Fox Soul’s The House

One of television’s most overlooked talk shows returns this week for a new season of laughter and heart-to-heart conversation. The House stars four openly LGBTQ African-Americans as the show’s “family:” psychologist/life coach Antonio LeMons; clinical psychologist Cheryl Rich; stylist Chris Curse; and writer/series co-creator Aaron Johnson Levy. Every week sees the four invite a guest over for dinner and a roundtable chat on issues facing the African-American and queer communities.

As with all talk shows, the hosts make or break the series. We’re happy to report that the Rich, Levy, Curse, and LeMons have a natural chemistry together and that their rapport can disarm even the most aloof of guests. In terms of representation, the show hits a new watermark: this isn’t just the family young, LGBTQ African-Americans wished they’d had. It’s the family any queer person could look to for love and belonging.

The Creeper: The Girl From Plainville

Elle Fanning and Colton Ryan star in this new Hulu series, based on the true story of Conrad Roy III. For anyone unfamiliar: 18-year-old Roy (played here by Ryan) died via suicide outside a department store. Amid his family’s devastation, they discovered he’d hidden a secret girlfriend: Michelle (Fanning), whom it seemed he’d only meta few times over a two-year period. At the funeral, Michelle shows up to meet Conrad’s mother Lynn (Chloë Sevigny) and father Conrad II (Norbert Leo Butz), but something seems off. Michelle seems to want to devote her life to Conrad’s memory…even after text messages reveal she actually encouraged him to kill himself.

The Girl From Plainville makes for captivating viewing due in large part to Fanning and Ryan. Both give enigmatic performances that toy with viewer expectations. Conrad rarely saw Michelle, so why would he despite living just 30 miles apart, so why did he maintain their “relationship?” And did Michelle really goad Conrad into killing himself just to live out a storyline from her favorite show? The answers to these questions get teased out over eight episodes. For LGBTQ viewers accustomed to internet and long-distance dating, The Girl from Plainville plays like a cautionary tale. That makes the series an absorbing watch, one as disturbing as it is enticing.

Italian queer musician Nieri drops another single this week, an ode to 80s New Wave synthpop. “Face” finds Nieri meditation on contemporary beauty standards in Los Angeles. The accompanying video finds him scrutinizing his looks via split-screen, singing about the insecurities that—we’re guessing—plague just about any reasonable human being. It’s another fine track from Nieri, who reaffirms his position as a promising and intriguing queer musician.

The Sip: The Broadway 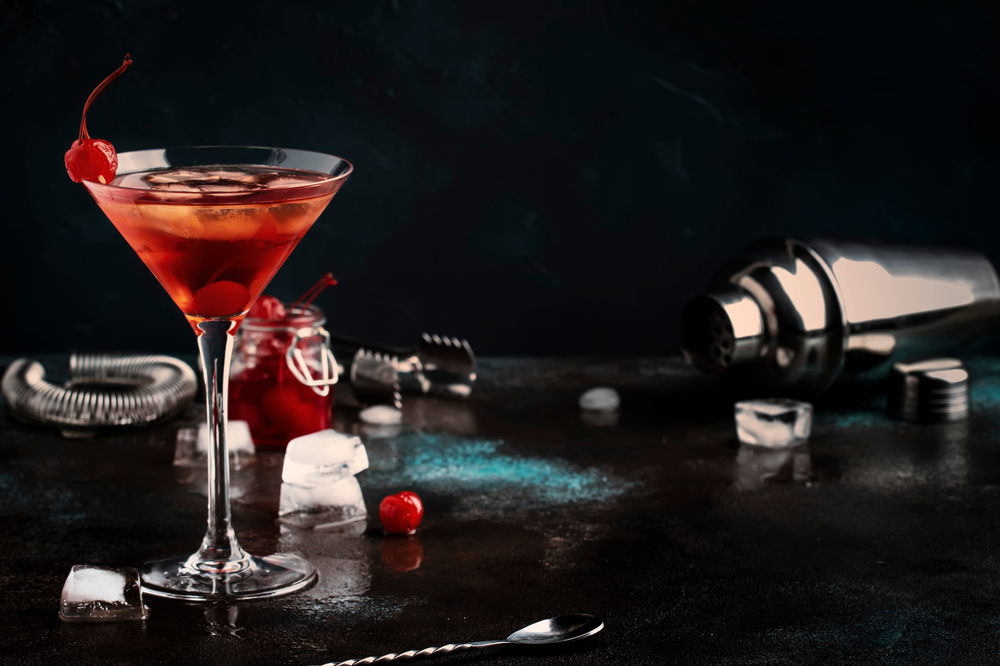 In honor of Nate and his musical dreams, we offer up this week’s cocktail: a tribute to the Great White Way. Be warned: this bourbon-based martini packs one heck of a punch…much like a great musical diva in a show-stopper. We also suspect that more than a few Broadway divas may have sampled one of these before going on stage.

Mix in a cocktail shaker over ice. Shake. Strain into a cocktail glass and serve. Garnish with a cherry.