The Catch: Work in Progress

We caught the pilot episode of this series back when it screened at Sundance for potential distributors. Apparently Lily Wachowski & the good folks at Showtime caught it too, as it finally airs this week. Work in Progress follows the neurotic life of Abby (played by series creator Abby McEnany), a self-described fat, butch lesbian with OCD who allegedly had her life ruined by the SNL character Pat. When her path crosses with Pat’s creator, Julia Sweeney, a strange friendship begins with Sweeney becoming something of a much-needed counselor for Abby. That relationship also becomes important when Abby meets the handsome transman Chris (Theo Germaine, of The Politician), and falls hard. Work in Progress examines very serious subjects in the queer community—gender fluidity, mental illness, and aging—with wit and courage. That, coupled with a weird meta-element (McEnany & Sweeney play themselves) makes Work in Progress a unique and funny series, one unlike anything else on TV.

One of the best—and most sexually fluid—TV shows of the year takes a final bow this weekend. Mrs. Fletcher follows Eve (Kathryn Hahn), a divorcee who just saw her son Brenden (Jackson White) off to college. Her sudden, abundant free time leads her to join a writing class overseen by Margot (Jen Richards)…and to explore her own sexual impulses. Those include a tryst with a younger man, some lesbian sexual experiences, and some very big laughs. Having seen the finale, we can attest: it’s downright hilarious. Moreover, Hahn gives a fantastic performance in the title role, as does Richards as Eve’s transgender moral guide. Much like Work in Progress, it’s not quite like any other show on the airwaves.

The Cause: Cyndi Lauper’s Home for the Holidays

Anyone looking to help a good cause, take a trip to Hollywood, or both, book your tickets now for Cyndi Lauper’s Home for the Holidays, the singer’s annual charity concert to help end homelessness among LGBTQ youth. This year’s show features an impressive lineup that includes Lauper, Billy Porter, Belinda Carlisle, Henry Rollins, Lily Tomlin, Margaret Cho and Kesha performing their hits. 100% of the proceeds go to ending homelessness among queer youth, which makes it a more than worthy cause. Besides, where else can you see Henry Rollins, Kesha and Billy Porter all on the same bill?

December 10 at The Novo at LA Live in Los Angeles. Tickets are available now.

The Adorbs: Season of Love

The march of delightfully schmaltzy holiday-themed movies featuring out-LGBTQ characters continues, this time with Season of Love, a storybook holiday story in the tradition of Hallmark’s comfort food Christmas movies, with one big difference. Season of Love follows a group of queer women as they struggle with work, love, family and the holiday bustle. Though utterly predictable, the movie does offer up an appealing cast of women, led by an energized performance by Jessica Clark. Given that and the thirst to see heartwarming cheese with a hearty dose of queer life mixed in makes Season of Love worth a look.

Who’d have thought that a documentary about a folk-singing drag queen would actually be one of the best movies of 2019? We caught Moving Parts on the festival circuit earlier this spring where it astonished us with its candid vision of the titular queen struggling to make a living on tour. Far from fan service or an overlong glorification of its subject, the movie doesn’t flinch as Trixie opens up about homophobia in her family, her abusive childhood, her relationship with fellow Drag Race alum Katya (who has an on-camera breakdown), and all the woes of trying to make it in the music business…while wearing heels. It’s a must for Trixie fans as well as anyone who appreciates the struggle for art.

For anyone missing the sun amid the December drabness, have a listen to the latest single from the electropop duo Naked & Famous. “Sunseeker” features the New Zealand natives singing about love and sunshine with the pair channeling visions of beaches, oranges and sunny days. It’s enough to fight back against the gloom, and an upbeat track to help lighten the mood on a cloudy day.

The Sip: Meet Me Under the Mistletoe 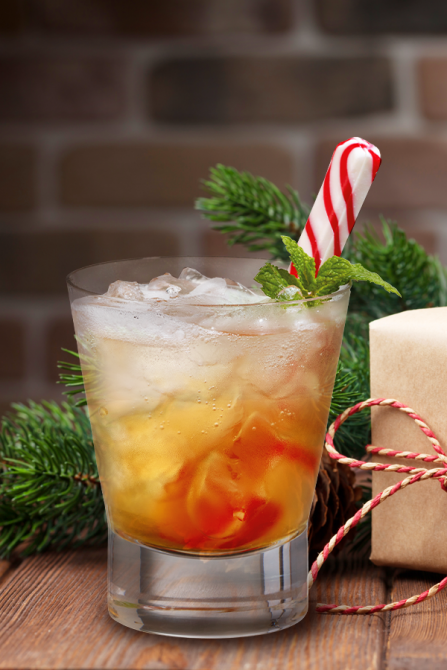 To get in the holiday spirit–or enjoy the taste of one–sip on this titillating taste which also works well as a mistletoe substitute.

Mix mint, syrup, brandy and ice in a cocktail shaker. Shake well. Strain into a glass with crushed ice. Add bubbly. Garnish with the candy cane.