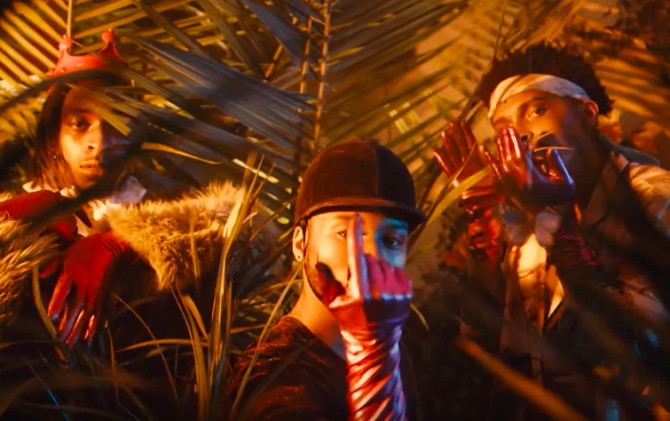 Minneapolis-based filmmaker Michael Jemison has always had a thing for barbershops.

“It goes back to being a kid,” he tells Paper in a new interview. “I remember plotting with my sister about how one day I’d make a gay barbershop.”

So it makes total sense that his new film Buzzed would be set in one.

Related: Todrick Hall to black gay kids: “Keep dreaming and never let them tell you no”

Jemison produced the five-minute short, which premiered online this week, with his partner John Mark. It explores what it’s like to be a queer Black person in a straight white man’s world.

The dreamlike film is set in a neighborhood barbershop/jungle and features a cameo appearance by Minneapolis city councilwoman Andrea Jenkins, who made history last year when she became the country’s first openly Black trans woman elected to public office.

Together, [Jemison and Mark] craft a piece of art that deftly blends reality and fantasy, color and light: the reality of what it’s like to be a queer Black person occupying a space traditionally reserved (or dominated by) straight men; the fantasy of a world in which queer Black people dare to envision the barbershop of their dreams, complete with color, fierce movement, and royalty.

“I really want people to know that there’s another layer for queer Black men and for Black women,” the 23-year-old filmmaker explains. “I think that their stories need to be heard.”

He continues, “I want to inspire greater empathy about these particular experiences [queer people of color navigate], in all spaces, even if you’re a queer or straight white person.”