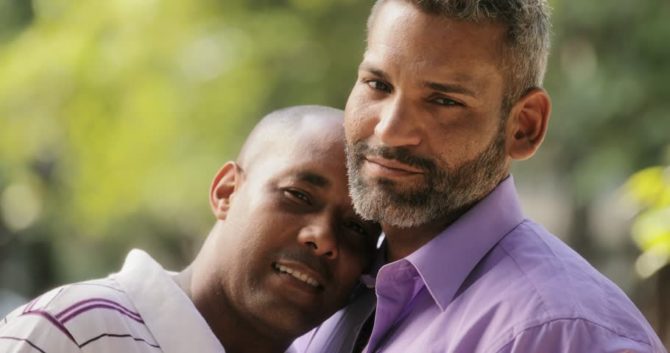 What started as a simple tweet by a young man in Michigan has quickly blossomed into a viral social media campaign.

It all started earlier this week when graphic designer Jermaine Dickerson proposed the following idea to his 5,000 Twitter followers:

I'm inviting all Black men to join me to help dismantle the stigma surrounding Black male intimacy (platonic and otherwise).

Share a picture of you embracing a male loved one and use the hashtag #BlackBoysEmbrace.

In an interview with Blavity, Dickerson, who is openly gay, says the idea was inspired by the struggles he often faced with showing affection towards other Black men growing up.

“Growing up I just found it really hard to express intimacy with the male role models in my life, it was hard for me to express a certain level of emotion,” he says.

Dickerson says he wants straight people to “be held accountable” for fostering heteronormative ideas of what male intimacy can look like.

“As I got older and began to learn about heteronormativity and all these things that sort of negate intimacy among Black men, I took it upon myself to try to deconstruct some of those oppressive ideals,” he says.

All sorts of guys have been getting in on the campaign…

This is my nephew, we are 5 years apart in age and I'm super affectionate towards him and I couldn't care less what anynody has to say or think about it! #BlackBoysEmbrace pic.twitter.com/3vkviSKCgN

Me and Frat bros (Straight) #BlackBoysEmbrace I am indicating who is straight identifying because that is the stigma we are trying to break pic.twitter.com/nadHBNog2N

My brothers. 2 straight. 1 gay. All Jamaican. Unlearning is in my family bloodline. #BlackBoysEmbrace pic.twitter.com/oEl7DpUOFh

And a few kids…

Let’s all join in for a collective “Awwwww.”