There seems to be an endless number of Republican politicians who’ve been caught behaving in ways that don’t reflect their self-proclaimed “family values.” One, in particular, who Queerty covered extensively in 2016 and 2017 is Mike Yenni, the Louisiana lawmaker who was busted for sexting a teenage boy. We recently got to thinking: Whatever happened that guy anyway? So we decided to do some investigating…

Just to recap: At the time the scandal broke, Yenni was the President of Jefferson Parish in Louisiana, located right outside of New Orleans. Just a few months after taking office in 2016, he made national headlines (in part due to our reporting) after being outed for sexting with Catholic school boy who he’d met at a graduation luncheon the previous year.

The boy’s name was Alex Daigle.

At the time, Daigle was 17 and Yenni was 38. Daigle wrote about the affair in an explosive article titled I was seduced by a politician published by the blog The Tab. In it, he detailed how he and the married Republican lawmaker had exchanged a series of dirty text messages before meeting up in a mall bathroom for a brief make out session.

“We talked about our lives and discussed the possibility of eventually meeting to sleep together,” wrote Daigle. “Once, on the phone, after telling him he should come to the mall to chat before my shift, he said that he ‘couldn’t be seen in public with other guys.’ I was confused. He clarified: he was a politician with a wife and a young child.”

During the illicit meetup, Daigle claimed Yenni gifted him a pair of $75 designer underpants. He later texted him, asking the teen to take pictures of himself modeling them. Then he tried enticing him into going on a weekend trip with another teenage boy to his bachelor pad in Oxford, Mississippi.

After the scandal broke, Yenni admitted to sending “sending inappropriate texts” and apologized for his actions, but he vehemently denied being gay and insisted certain elements of the story were “fictional,” though he declined to clarify which ones. He also filmed a TV spot assuring constituents that he never broke the law or violated his oath of office.

Despite his apology and claims of no wrongdoing, calls for Yenni’s resignation ensued, but he refused to step down as Parish President, telling a local radio host, “I didn’t campaign on family values,” insisting he’s “not gay,” and saying he had already “asked God for forgiveness.”

He also paraded his very pregnant wife, Michelle, around on local television. She told a TV reporter that she was “disappointed” with the media’s handling of her husband’s scandal as well as with “different things that have been going on.”

Well, the FBI actually launched an investigation into the matter to determine whether Yenni had, in fact, committed any crimes, despite his claims to the contrary.

The age of consent in Louisiana is 17, but there’s a federal law that bans the use of telecommunications devices for “the transmission of any comment, request, suggestion, proposal, image, or other communication which is obscene or child pornography” with anyone under the age of 18.

Despite this law, the FBI ultimately chose not pursue the case. But while Yenni may have avoided federal charges, locally he became a pariah.

Not only was he barred from attending anymore luncheons at the Catholic boys school where he originally met Daigle, but the Jefferson Parish School Board banned him “indefinitely from appearing at any public school facilities or events, including sports contests and festivals.”

When Yenni lobbied to have the ban lifted, the city council passed a resolution upholding it. “I have done nothing to justify this,” a disappointed Yenni said afterwards. “I haven’t been charged, arrested, investigated. Nothing.” 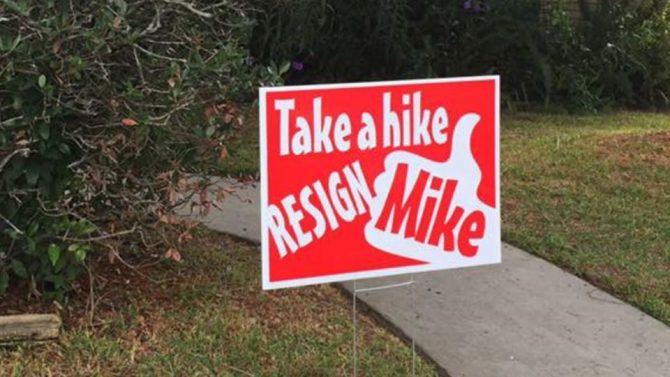 In 2017, a $120,000 effort to recall Yenni from office was launched. The recall was unsuccessful, however, when organizers could only get 45,000 of the needed 90,000 signatures needed to make it onto the ballot. Yenni stubbornly remained in office, but by then his reputation was completely tarnished.

In August 2019, as his first term as Jefferson Parish President was winding down, Yenni announced he would not be seeking reelection.

“I recognize that running for a second term would result in me having to spend the entire campaign talking about issues other than the great strides and forward movement Jefferson Parish has made under my administration,” he said. “I can’t submit my family, friends, and this parish to months of that kind of campaign.”

He continued: “I also want the people of Jefferson to know that I recognize the disappointment caused by my personal actions. I apologized then and I am just as contrite today.”

Only January 6, 2020, Yenni’s tumultuous term as Jefferson Parish President finally came to a close to little fanfare or media attention. He was succeeded by Cynthia Lee Sheng.

Today, the father of three, who still maintains he’s “not gay,” appears to be turning his focus back to the United States Naval Reserve, where he’s served since 2010 and holds the rank of Lieutenant in the Public Affairs Community.

In a recent Facebook post, Yenni shared photos and video from a training weekend he attended. “It’s great weekend when you can serve your country and belong to the greatest navy in the world!” he wrote. “I get to drill with some amazing sailors.”