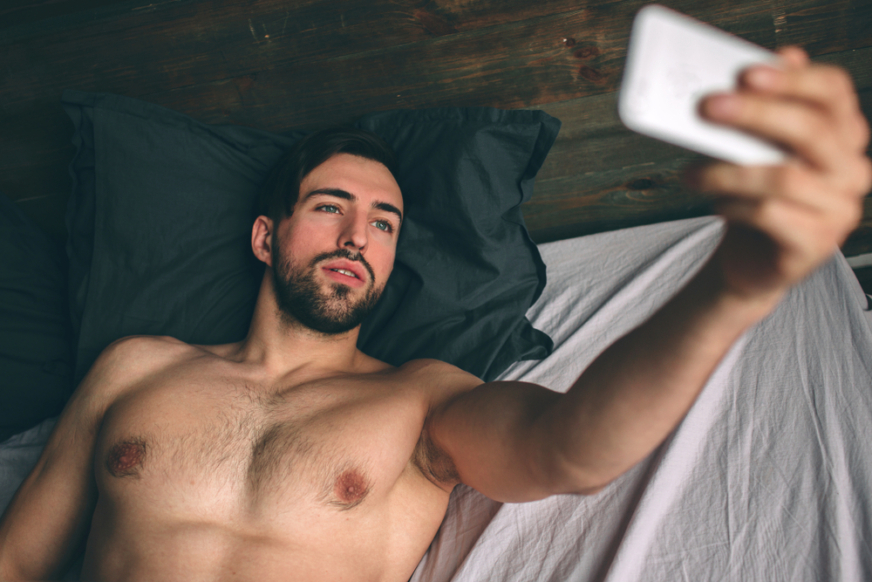 For gay and queer men, a nude can certainly get the ball rolling with sexual and even romantic relationships. But not everyone is willing to send their X-rated pics to just anyone.

On Reddit’s r/gay subreddit this month, one user asked, “Why are dudes so obsessed with nudes? … Why are guys so surprised or hurt when I say I’m not comfortable taking pics and sending them?”

“Great question,” another Redditor added. “To be honest, I just like looking at bodies.”

Indeed, several Reddit commenters said they simply enjoy gazing upon the human form. “I just like how the male body looks—d*ck, balls, shoulders, nipples, chest, the whole thing. So nudes are enjoyable for me,” one wrote.

Another person remarked, “I can’t speak for every guy, but for me, it was mostly curiosity about what other guys were packing and how it differed from myself. Though I was always respectful if someone didn’t want to share nudes. I know it’s not everyone’s cup of tea.”

One commenter said he enjoys sharing a dirty little secret, so to speak, with a dude.

“Imagine receiving a photo that nobody else has about something that isn’t allowed to be showed everywhere. It’s kind of forbidden, and forbidden tastes best.”

But in a dissenting vote, another commenter said he finds nearly-nude photos hotter than fully-NSFW pics: “I find it way sexier when someone sends me a pic in sexy underwear with just a hint of pubes or butt showing. It’s like the difference of getting to unwrap a present on your birthday and having someone just hand you something and say it’s your gift.”

“Good nudes or semi-nude pictures (not the ‘perfect’ Twitter/OnlyFans ones) kinda tell me how sexual and sensual someone can be,” that guy explained. “If I’m talking with a bottom who knows how good his ass looks and is proud to show it, I’m even more inclined to have sex with him. In the end, men in general are visual creatures. We like to see what we’re getting ourselves into.”

Someone else commented along similar lines, saying that willingness to send nudes shows sexual openness.

“If I’m trying to hook up with somebody and they won’t send anything risqué or enticing, that shows me that I’m wasting my time looking for sex in this situation,” he wrote. “And doubly so if they won’t send a face pic, because that shows me they’re not comfortable exposing themselves to the world as a whole, and if we do wind up meeting, we are going to have to meet with me having absolutely no idea what they look like or what their intentions are. And that’s not safe.”

“So, I just ask what they look like naked. If they’re comfortable showing that, that means I have a good chance of hooking up with them, and even if I don’t hook up with them, then I know that they aren’t just wasting my time.”

Related: Weatherman fired over leaked webcam pics vows to fight back: “I don’t apologize for being sex-positive”

But another commenter replied to point out that sending nudes can be a “huge risk,” since there’s always the possibility of those photos coming back to haunt the picture-taker.

“There are plenty of people who would hook up but don’t want to share their nudes, because they don’t know how those nudes [will] be used. … I don’t think sending nudes is wrong, but every time you do, you need to prepare for the possibility that someone you didn’t intend to see them may see them. The problem that I have with this discussion is the shaming of someone who doesn’t want to send nude pictures.”

That last point is worth repeating: As we’ve said before, you don’t need to apologize for not sending nudes. But for all you photographers and patrons of nudes out there, how would you describe the appeal of those steamy snapshots? Keep the conversation going in the comments below.