Acclaimed photographer Blake Little has a new photo book out, entitled Primary. It’s his first collection of nudes. We’re only able to bring you censored images (sorry!), but they give you a taste of what to expect.

Little was born and raised in Seattle, WA and studied at the University of Washington and Seattle Central College where he completed his photography degree in 1984. He then relocated to Los Angeles.

As a commercial photographer working mainly in the entertainment industry, he’s built up an enviable portfolio, shooting everyone from Tom Cruise and Julianne Moore to Samuel Jackson and Gwyneth Paltrow.

Besides his commercial work, Little also pursues his passion for fine art photography. This has included covering contemporary western culture in Alberta, Canada, and documenting the gay rodeo scene. An ongoing project, Fluid, exhibited last year in Canada, is documenting members of the transgender, non-binary and gender-fluid community.

Little’s also well-known for his portraits of men, such as those collected in his 2011 collection, The Company of Men, and 2013’s Manifest.

Primary continues in this tradition, but this time, the models are naked.

“‘PRIMARY’ usually refers to what comes first or is most important. We come into this world without clothes and all the associations and signifiers they bring. It’s where we start. To be naked is often to be revealed, stripped-down, raw and honest,” says a press release for the book.

Talking to Queerty, Little says that he again realized how taboo nudity is for many when it came to finding models. Lots of guys declined, despite Little’s pedigree as a photographer.

“The men have different responses to being photographed nude. Posing nude for most guys is a big issue for societal, family and professional reasons. About half of the men I asked decided not to be photographed.”

In the end, over four years, he managed to shoot 100 different men, both in his studio and on locations around North America and Europe. Most pose solo while there are also some couples. The book features 166 photos.

“I let the shoot happen organically and capture their reaction. The book includes everything from flaccid to erect and lots of in-between.”

Related: 10 sexy guys from one of the world’s top portrait photographers

Would it be fair to say Little shoots the type of guys he finds attractive?

“For Primary, I photographed a full range of gay men from age 23-65. I find each of the men beautiful in their own way and felt compelled to photograph them. For me, they are part of an international community.

“I suppose they represent a particular gay subculture that I identify with.
With these nude portraits, my main focus is to capture the essence of the individual and a true connection with the viewer while still concentrating on the figure, composition and environment.”

Primary, which includes the uncensored versions of the images shown here, is available now. 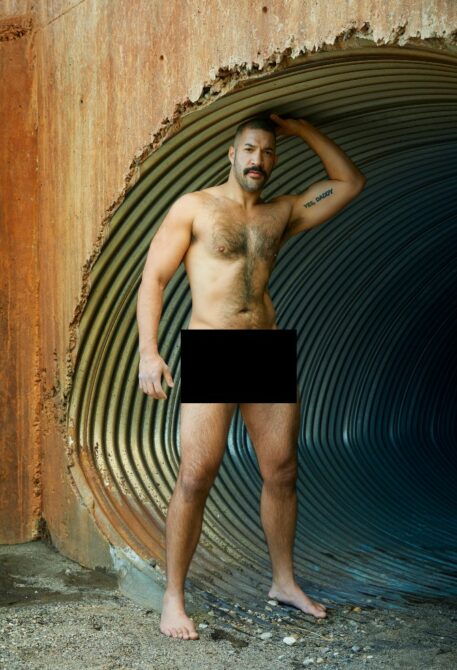