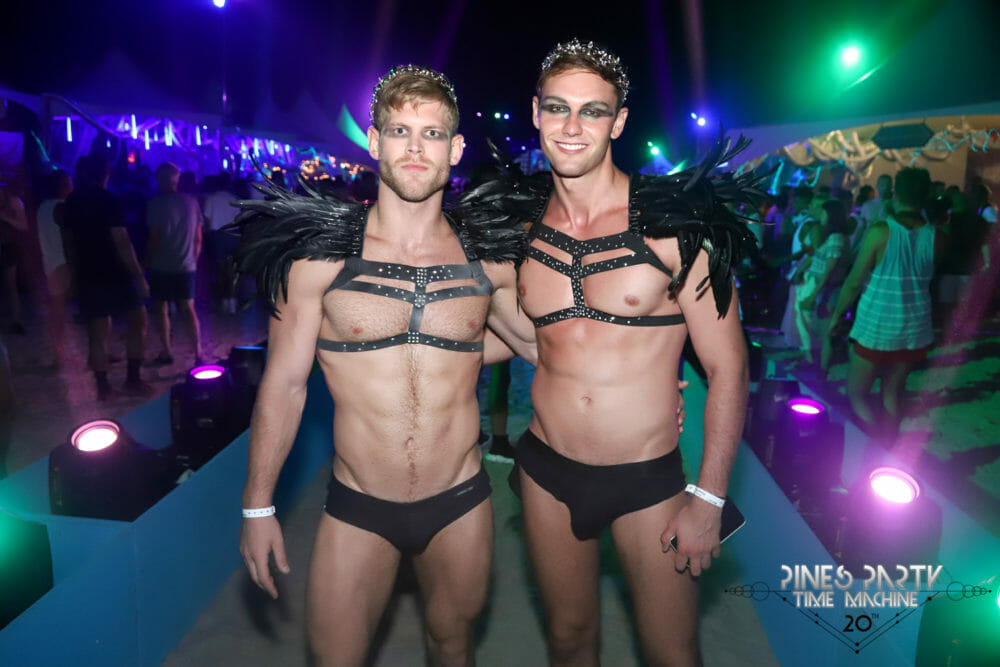 Celebrating its 20th anniversary, the Pines Party returned to Fire Island last month, bringing lots of magic, mystery, and mayhem to the popular gay destination. The most popular weekend in Fire Island Pines, the island is transformed annually into a huge celebration that begins Friday evening and lasts until early Monday morning.

This year, the Pines Party got an exciting update, offering attendees an app they could download to stay up to date with the schedule of events and locations for all the happenings on the island.

Starting off the weekend was the VIP gathering, where VIP weekend pass holders are able to mix and mingle at one of the fabulous houses on the island. Menswear designers Parke & Ronen had set up a special gifting suit in the one of the bedrooms, offering attendees a huge discount on anything their heart desired. 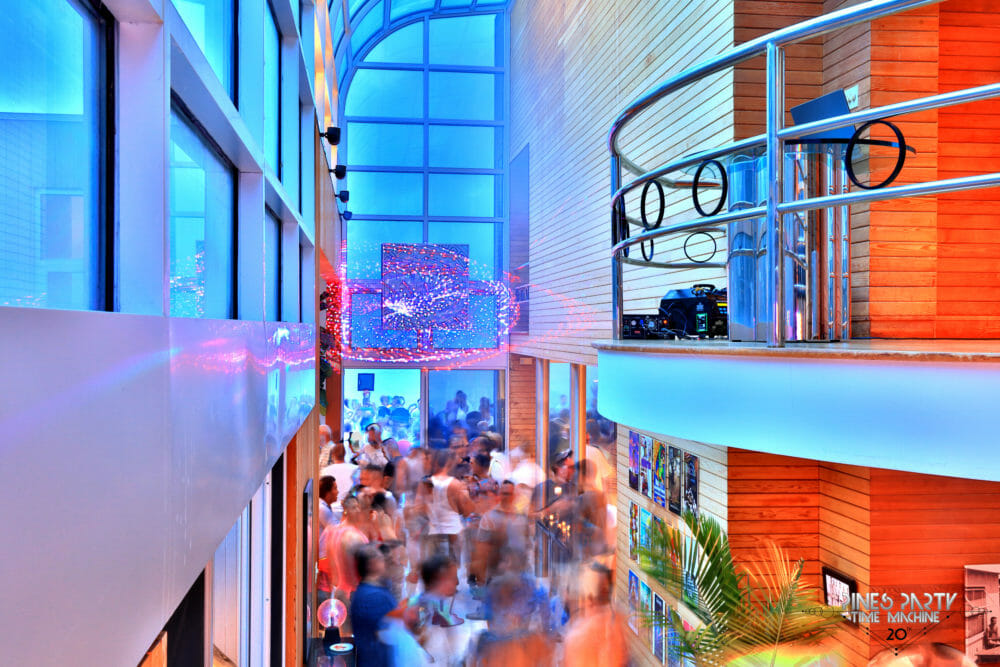 Saturday afternoon, the fun began at a pool party at one of the most beautiful houses on the island, known as the Pines Club. This year’s theme, Land Before Time, saw attendees don their best prehistoric swimwear looks, for dancing and dipping in the pool. 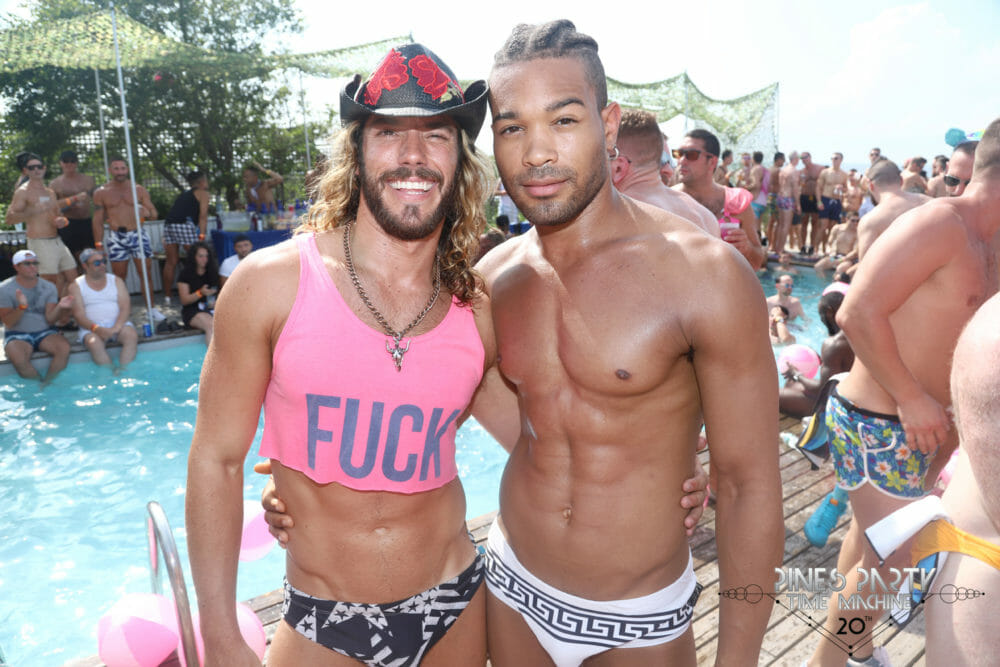 Life sized dinosaurs made it out on the dance floor, and giant turkey legs were served on silver platters. Eating at a pool party? Never. 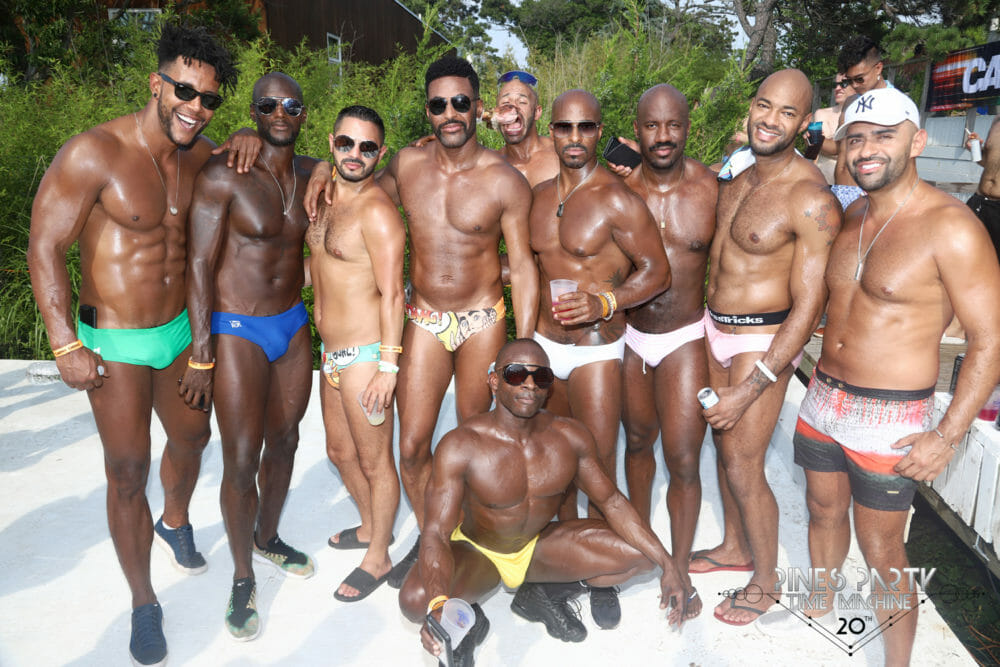 Then Saturday night was the main event, where thousands gathered on the beach for a dance party under the stars. This isn’t just another circuit party, too. With the energy of Burning Man and the vibe of Ibiza, there’s much more that meets the eye to this annual gathering on one of the gayest beaches in the world. With VIP tents where attendees are able to mix, mingle, and drink bottomless booze, there’s lots of socializing to be had. 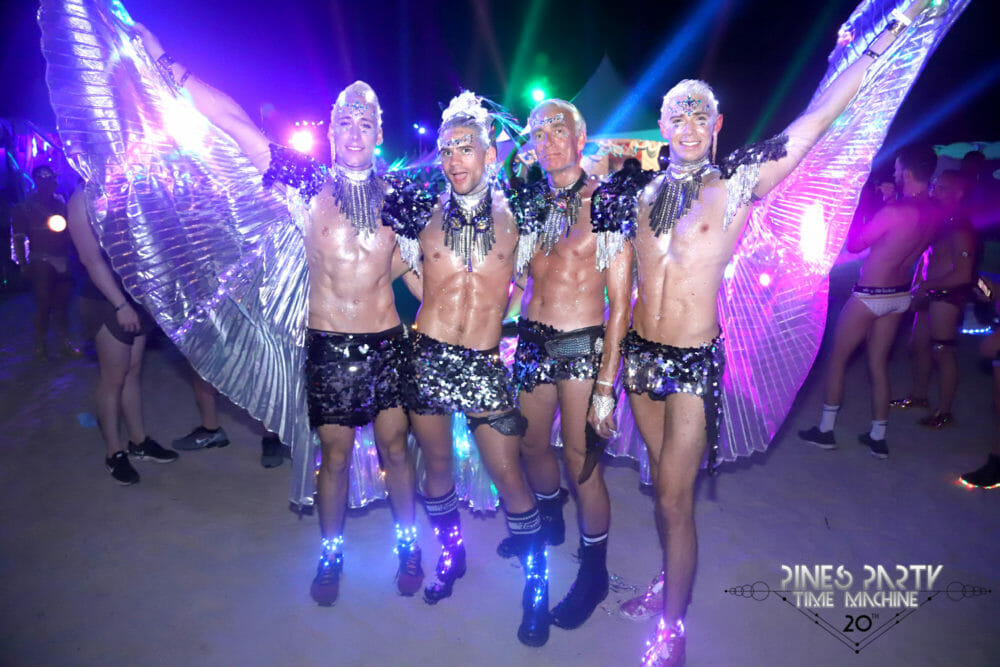 This year’s theme for the main event was Time Machine. A limitless theme, anything was possible and attendees didn’t disappoint with their imagination and creativity. From ancient Egypt to French renaissance, from futuristic intergalactic realness to the decade of disco, there was a look for every era on the timeline. 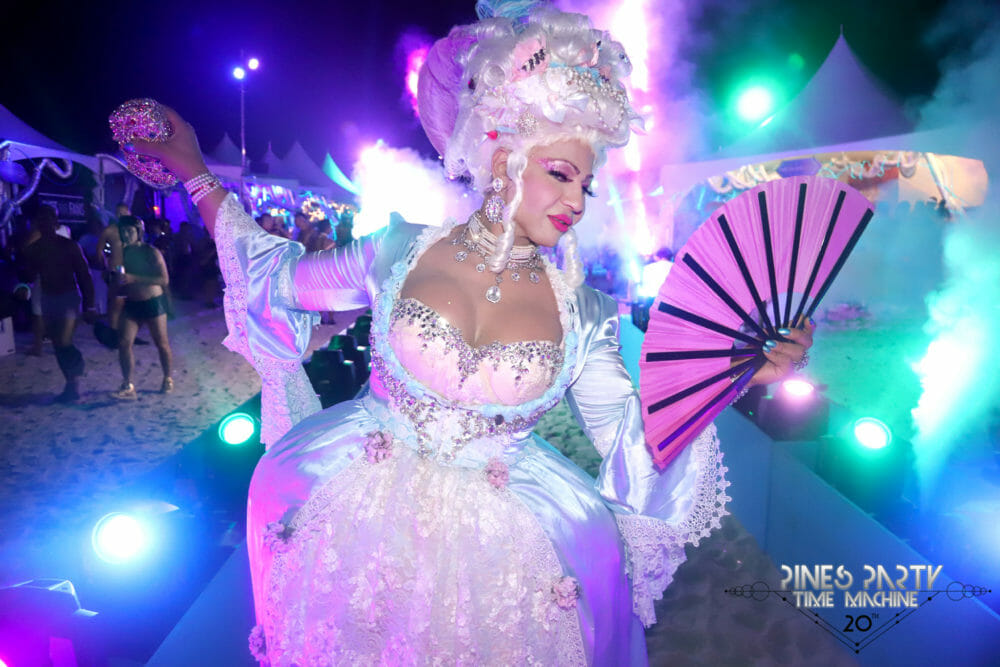 DJ trio Occupy the Disco supplied the music for the beginning of the night. After their crowd pleasing set, Iman Le Caire and drag queen Pixie Aventura took to the stage to perform a time traveling medley consisting of songs from Madonna, Cher, Ariana Grande, and more. 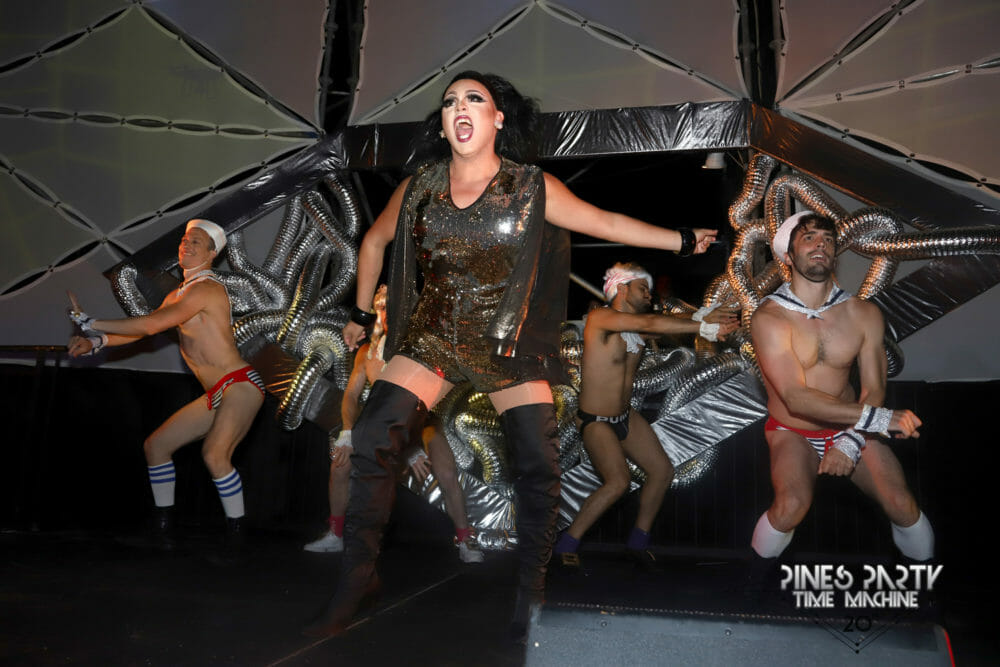 The party continued well into morning, until the sun rose up from beyond the horizon. Oscar G, the headlining DJ, concluded his set with a Peter Rauhofer remix of “We Belong Together” and the 12″ choice mix of CeCe Peniston’s “Finally.” If you didn’t think the party could get any gayer, it just did. 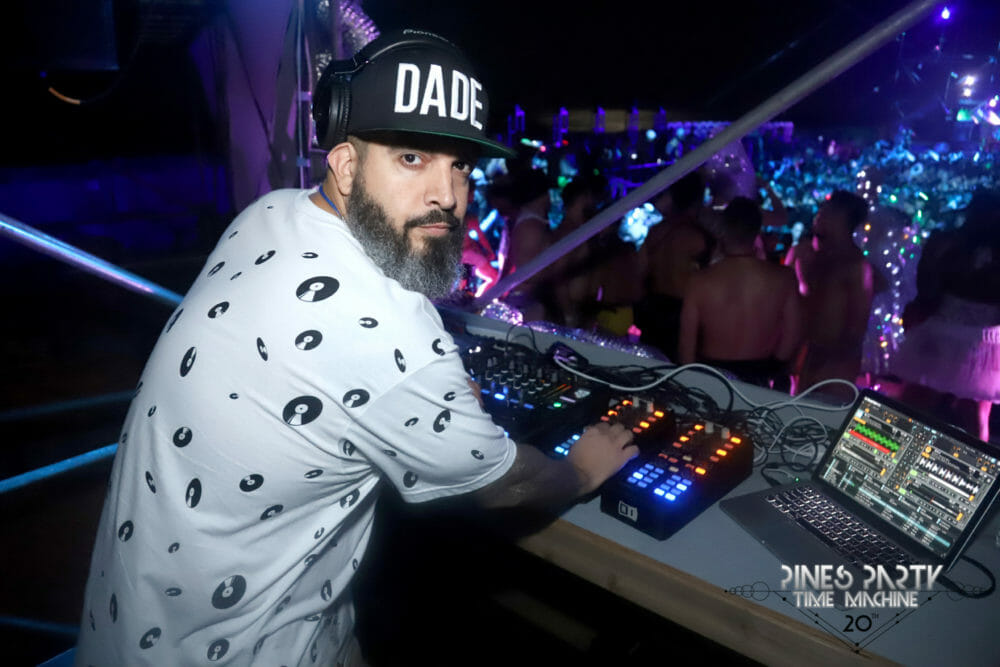 Sunday, there’s the Morning Party at the Pavilion, the island’s only dance hall. While some opt out to sleep off the night before, hundreds muster up the energy somehow to gather at the club to keep the party going. House legend Abel provided the music, that kept the boys on their feet  until noon. 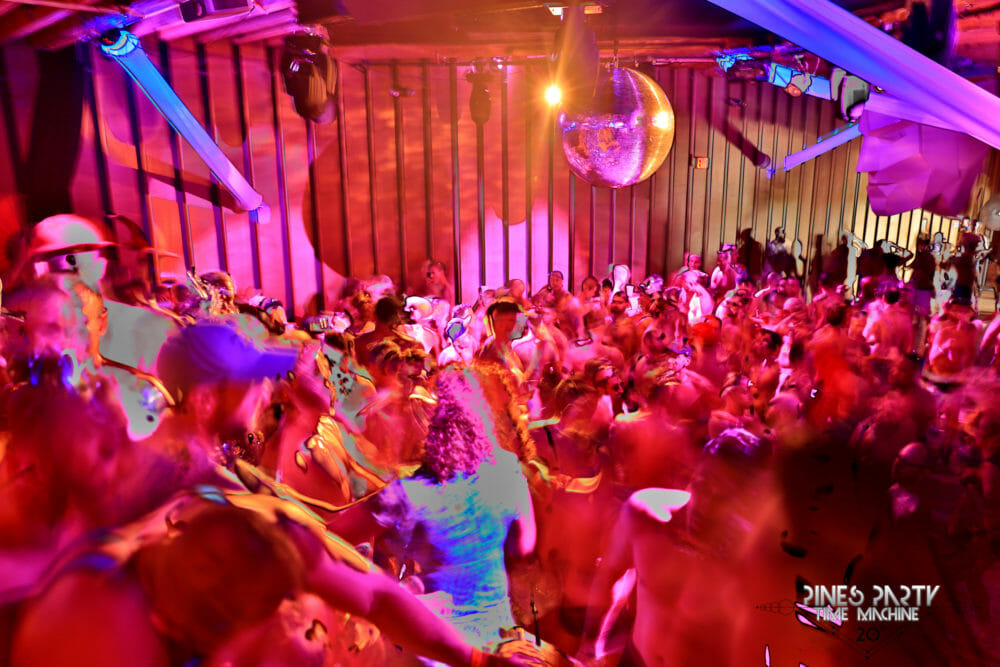 Later that afternoon, there’s the Closing Party, a much more chill gathering at one of the houses on the island that finds people detoxing and enjoying the views of the Bay. 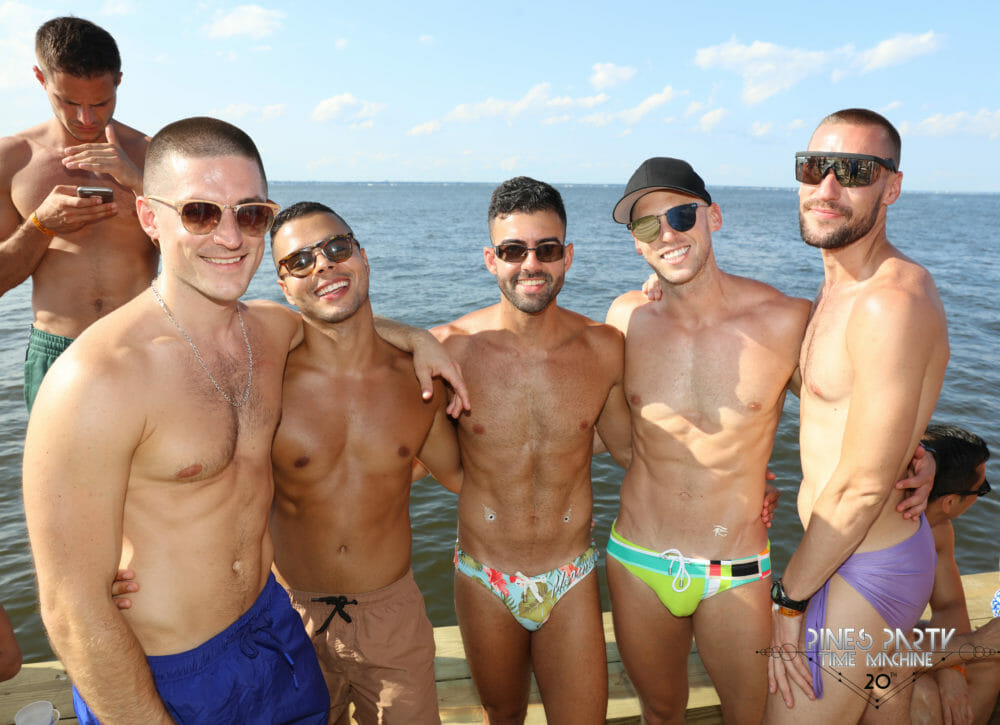 Sunday night, the official unofficial party is DJ Morabito spinning back at the Pavilion. Almost 1,000 people made it out for this night, continuing the party well into Monday morning.

The Pines Party may seem a like a whole lot of frivolous carrying on and debauchery, but it’s all for a good cause. Funds raised from the weekend are given to Stonewall Foundation, who then disperse the money to non-profit LGBTQ organizations that need the money to do the important work for our community.

Photos by: Wilsonmodels and Robert Zash