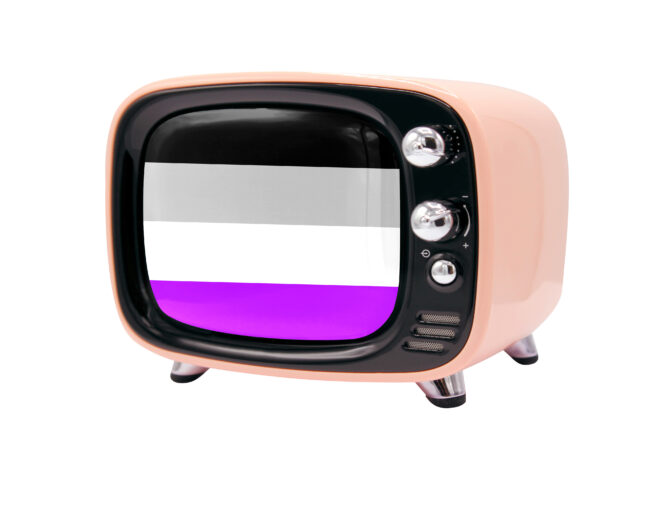 According to LGBTQ media watchdog GLAAD, LGBTQ representation on television reached record highs this year, with 11.9 percent of the 775 series regular characters scheduled to appear on scripted broadcast primetime programming being part of the LGBTQ community. Despite this, asexual representation in media remains scarce, with only two asexual characters out of the 637 LGBTQ characters counted in GLAAD’s report.

With anti-LGBTQ legislation on the rise and increased reports of anti-LGBTQ violence, it’s all the more important for storytellers to put LGBTQ stories front and center, as well as for advocates to highlight the few stories out there that are readily available. Here, we take a look at seven asexual characters from films, TV shows, and books that have paved the way for asexual representation.

RELATED: This DC Comics character just came out as asexual

In 2017, asexual fans of the hit animated series Bojack Horseman rejoiced as the lovable slacker Todd Chavez opened up about his sexuality to his then-girlfriend. When asked what “his deal” was (since the two seemed to be romantically involved but weren’t having sex), Todd replies, “I’m not gay. I mean, I don’t think I am. But I don’t think I’m straight either. I don’t know what I am. I think I might be nothing.”

In season four, Todd becomes more open about his asexuality and even meets up with fellow asexuals. In an important scene for ace representation, Todd’s asexual friends talk about how asexual doesn’t necessarily mean aromantic and how asexual people can still enjoy being in romantic relationships.

Based on The Mortal Instruments book series by Cassandra Clare, Shadowhunters is a supernatural TV drama about human-angel demon slayers called “Shadowhunters”. In season two, Shadowhunter Isabelle develops a relationship with Raphael, a vampire. But when Isabelle tries to kiss Raphael, he tells her, “I’m not like that. I’m just not interested in sex. I’ve always been like this.”

Raphael’s story is particularly interesting in that it deviates from the popular stereotype of vampires as sensual and seductive beings.

Despite its fairly conservative roots, Archie Comics has done a pretty good job at bringing LGBTQ representation into the fold – starting with the introduction of Riverdale High’s first openly gay student, Kevin Keller, in 2010.

In 2016, writer Chip Zdarsky and artist Erica Henderson sought to add more dimension to the beloved crown-wearing, burger-eating character Jughead Jones by portraying him as asexual in the Jughead No. 4 comic.

Unfortunately, Jughead is not portrayed as asexual in Riverdale, the live-action reimagining of the Archie comics.

From the author and illustrator of the webcomic Heartstopper (which has just been adapted into a critically-acclaimed TV series of the same name), Loveless is a novel that follows 18-year-old Georgia as she navigates university and comes to terms with her asexual, aromantic identity.

In an interview with We Need Diverse Books, the author, Alice Oseman, explains the inspiration behind the novel, saying, “I’d read a lot of coming out stories…but I’d never read a book which had an aro-ace coming out story as the focus, that explored all the confusion and doubt and exploration involved in figuring out your sexuality. Something like that would certainly have helped me a lot when I was younger, and I was very excited about exploring all that emotional turmoil!”

Emmerdale is one of the longest-running soap operas in the UK. Set in a small village in the Yorkshire Dales, the show features a revolving cast of characters from various families residing in and around the village.

In 2016, the soap introduced Liv Flaherty, a teenage troublemaker who struggles with her inability to connect with those close to her. Eventually, Liv comes out as asexual – becoming the first asexual character in a British soap opera. As it appeared on one of the most widely watched programs on UK television, Liv’s coming out marked a huge step in asexual representation in the UK.

6. Kamai – Beyond The Black Door

Beyond the Black Door is a dark fantasy novel that revolves around Kamai, a “Soulwalker” who can visit other people’s souls when they sleep. With each soul she visits, she is haunted by a black door, which she is advised never to open.

Not only are LGBTQ identities found all over Beyond the Black Door’s world, but its main protagonist, Kamai, is also biromantic asexual herself. The book does a good job of explaining asexuality to its readers, using a chart of moons to explain the asexual spectrum and how it can co-exist with other identities.

In the seventh season of The CW’s Legends of Tomorrow, Esperanza “Spooner” Cruz, a superhero who has the power to communicate with aliens after being abducted as a kid, comes out to her teammate Zari Tarazi.

When asked by Zari what her “type” is, Spooner says, “I don’t really get those types of feelings for anyone. Maybe it’s one of those things those aliens messed up about me.” But Zari quickly affirms Spooner’s identity, telling her, “No, what you’re describing is totally normal. It just means maybe you’re ace. Asexual. People who identify as ace have little or no interest in sex but many of them still want to be in relationships.”

In a world where sex and romance are so ingrained into our culture, nuanced asexual representation in the media can be life-changing for a lot of young people who are coming to terms with their ace identity. By shining the spotlight on ace characters, the media on this list are not only paving the way for better ace representation but also helping break down the myths and misconceptions about asexuality.

RELATED: Being a panromantic asexual: What it means and what you should know