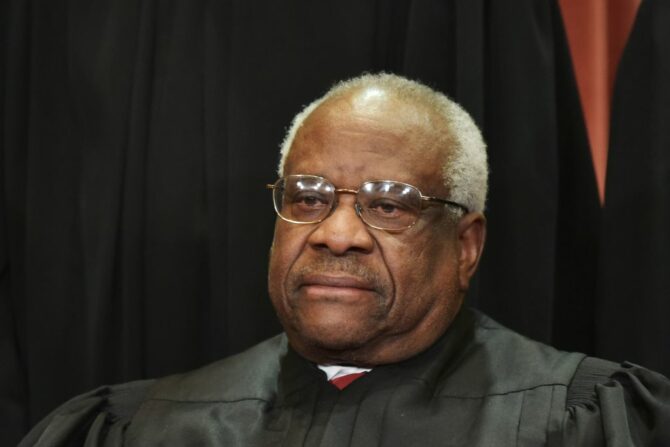 While all eyes are on Supreme Court nominee Judge Ketanji Brown Jackson, something very serious appears to be going on with Justice Clarence Thomas, who has been in the hospital since last Friday.

Yesterday, the Supreme Court wouldn’t say whether the 73-year-old, who was appointed former President George H.W. Bush in 1991, was still in the hospital for “flu-like symptoms” after it was previously reported that he would be released earlier in the week.

The court said Sunday that Thomas had been admitted to Sibley Memorial Hospital in Washington on Friday after experiencing “flu-like symptoms,” and he was diagnosed with an infection. His “symptoms are abating,” and he was expected to be released Monday or Tuesday, the court said in a statement at the time. But on Wednesday morning, court spokeswoman Patricia McCabe said she had no update to provide.

The court heard arguments Wednesday morning and Chief Justice John Roberts said, as he has for the past two days, that while Thomas was not present he would participate in the case by reviewing the arguments’ transcript and briefs. Roberts said Thomas was “unable to be present today” without explanation.

It’s also not totally clear what exactly is going on with Thomas, who dissented in both the Obergefell case, which made marriage equality the law of the land, and Lawrence v. Texas, the decision that struck down a Texas law banning gay sex. All the court has said is that he doesn’t have COVID-19.

Related: Brett Kavanaugh is probably going to start crying again when he sees why he’s trending on Twitter

Reports of his failing health come at the same time his wife, Ginni, has come under scrutiny for her extreme far-right activism, including her involvement with several anti-LGBTQ hate groups, her attendance at the January 6 “Stop the Steal” rally outside of the White House, and donations she made to politicians that present “concerns about potential conflicts of interest for her husband.”

Related: Clarence Thomas’ wife’s decades of atrocious behavior is finally catching up to her

Since 2018, Thomas has been the senior associate justice, the longest-serving member of the Supreme Court, with a tenure of 30 years.

Clarence Thomas has been in the hospital for six days and we don’t know what’s going on with him.

The Supreme Court absolutely should disclose whether Clarence Thomas is still in the hospital. Of course the public has a right to know…he is missing Supreme Court arguments.

Why all the radio silence about Clarence Thomas? He has been in the hospital since last Friday with “flu-like” symptoms unable to participate even virtually in SCOTUS arguments. Anyone else read Stacey Abrams “While Justice Sleeps”?

Thoughts and prayers continue for Clarence Thomas. So grateful I can’t be arrested for thoughts.

The government is hiding the fact that a tapeworm has been making Clarence Thomas’s decisions for decades.

When Clarence Thomas retires to spend more time with his insurrectionist wife, Biden should nominate an Asian woman to the SCOTUS. There are so many great choices.

No, they can't pretend like Clarence Thomas is alive until Biden is out of office. Y'all are silly.

I sure hope Clarence Thomas is being treated by a qualified YouTube doctor with six views..

Clarence Thomas health concerns will be the only time you see Republicans worry about a black man’s recovery.

Clarence Thomas has missed his third day of arguments. He’s apparently not even well enough to attend via Zoom. Don’t we have a right to know just what the heck is goin’ on?

If Justice Clarence Thomas doesn’t make it, we should respectfully wait as long as Republicans did when they replaced Ruth Bader Ginsburg.

While you’re here, watch the trailer for the 2016 HBO film Confirmation about Thomas’ dramatic 1991 confirmation hearing starring Wendell Pierce as Thomas and Kerry Washington as Anita Hill, his former employee who claimed he sexually harassed her.