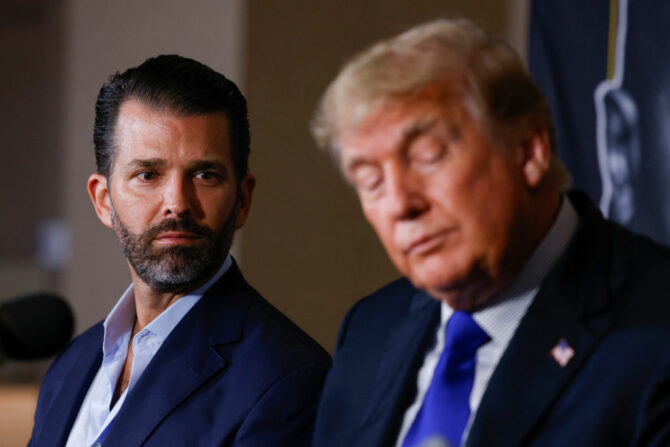 Jr. launched MxM (“minute by minute”) News last month in an effort to compete with Apple News and Google News. The news aggregation app curates  stories from a variety of  online publishers across the  wide ideological spectrum.

Related: Don Jr. has a new grift and it will make your eyes roll right out of your head

But evidently, MxM News is struggling to get off the ground because the ex-president’s eldest son is now leaning on his fiancee, Kimberly Guilfoyle, to help promote it. Yes, the same Kimberly Guilfoyle who did an absolutely abysmal job as Donald Trump‘s 2020 campaign fundraising chair.

On Easter Sunday, Guilfoyle tweeted, “I get all my news from @mxmnews, created by @DonaldJTrumpJr! Download the app and stay informed.”

I get all my news from @mxmnews, created by @DonaldJTrumpJr! Download the app and stay informed: https://t.co/xVct4MACjg https://t.co/mcNyqAFs0k

Seriously? This is almost as pathetic as the time she hawked Trump branded scented candles on her Instagram Story during the 2020 holiday season.

It certainly looks as though Jr.’s app is on a similar crash course as his father’s crappy Twitter knockoff, Truth Social, which has been a source of embarrassment for the ex-president over the past several months.

A March report by Sensor Tower revealed Truth Social suffered a 93% drop in new signups since going live in February, with downloads falling by more than 800,000. On top of that, weekly visits by people who already had the app fell to 1.9 million, from a high of 6 million when it first launched.

No wonder you’re so stupid.

both ya coking it up easter morning hu

You shouldn’t get your news from one source—especially when it is obviously biased.

This site is headquartered in Moscow.