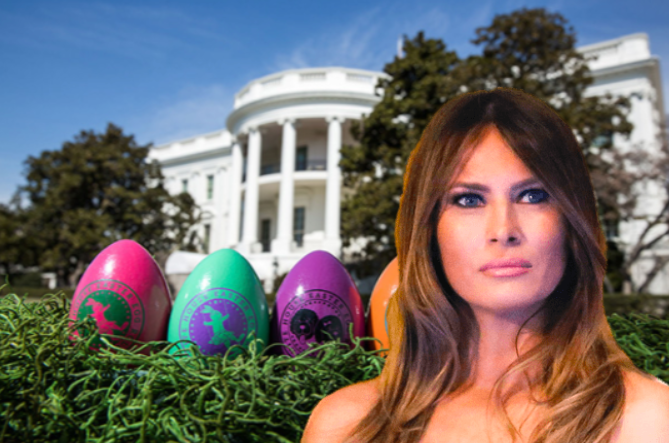 For nearly 140 years, the annual Easter Egg Roll has been the biggest single public event held at the White House, drawing over 35,000 people from around the country, including local schoolchildren, military families, Congressional guests, and members of the general public.

Apparently, she’s been too busy squeezing that $2.9 million out of the DailyMail for publishing that unflattering story about her last year to focus on her role as first lady. #Priorities.

Since 1878, the Easter Egg Roll has always been coordinated by the first lady. Seeing as how Mrs. Trump not only lives 200 miles away from the White House, but has yet to bother putting together an official staff, this year’s event, like Trump’s numbers in the popular vote, is expected to underperform bigly.

The New York Times reports the event is being “quickly thrown-together” and is expected to draw about 20,000 people. That might seem like a lot, but it pales in comparison to the 37,000 that attended last year.

But that’s not all.

Each year, the White House orders wooden Easter eggs from Wells Wood Turning in Maine. The eggs are handed out as gifts and sold as souvenirs. But this year, Melania failed to get the order in on time, despite the company’s attempts at alerting both she and her husband, as well as Ivanka, via Twitter to let them know time was running out over a month ago:

As a result, the eggs could not be manufactured in time.

On top of all that, a spokesperson for the D.C. area public schools, which usually gets around 4,000 tickets to the event, tells the New York Times that they haven’t even been approached this year. Neither has the American Military Partner Association, an organization that represents military families. Oh, and no tickets have been distributed to members of Congress to give to their constituents either.

Also, the event typically features Sesame Street costumes provided by PBS Kids, but because the first lady submitted her request so last minute, only one costumed character will be able to attend.

Finally, no celebrity entertainers have been announced or are even expected.

How could it not be with the Trumps in charge?