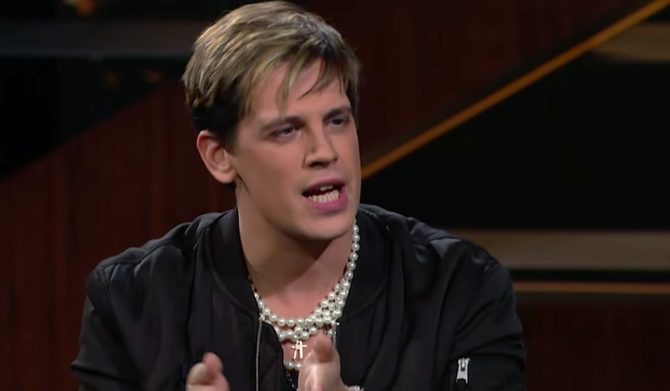 Someone open a clinic for nausea.

The New York Post reports that Yiannopolous revealed the announcement during a new interview, in which he described the “reparative therapy” facility “to help other people go through the same journey that I’m on myself.” He added that he has planned a Florida location for the clinic.

Yiannopolus then added that he’s adopted a life of celibacy. While not heterosexual, he says he now refuses to indulge his same-sex desires, even though he’s married to a man. He also said that the term “ex-gay” is meant to be inflammatory.

“‘Ex-gay’ is a silly expression but it has the virtues of slotting into a print headline neatly and absolutely enraging the opposition. Celibacy is a modest and achievable middle-term goal; naturally, in the end, my aspiration would be to take it all the way,” he said.

“This has been the easiest thing to raise money for that I’ve ever done.” he added. “There is an enormous demand for this among people who believe they’ve been led astray by — it sounds silly to call it this — but you know, the gay establishment.”

“I think part of that is the resurgence of religious, socially conservative, kind of reactionary politics among noisy young conservatives,” he further speculated. He also claims to have had numerous applicants to the program already. He also dismissed any thought that the program could cause any permanent harm, particularly in youth.

“For those people to suggest that reparative therapy is somehow damaging to people’s self-esteem, is so laughably preposterous, I don’t take it seriously,” Yiannopolus said.

Why are we not surprised?

Conversion therapy is the widely-discredited treatment to “cure” or change a queer person’s sexual orientation or gender identity. Both the American Medical Association and American Psychological Association have dismissed the practice as both ineffective and extremely harmful for the patient. Accordingly, an increasing number of states have banned the practice outright.

Milo Yiannopolus has tried to make a career out of pandering to far-right interests, trying to market himself as a conservative commentator. Like the conversion therapy he now espouses, he’s been widely discredited as a writer, commentator and revealed as a puppet of White Supremacist and former Breitbart editor, Steve Bannon.  An investigation in 2017 revealed that Bannon had hired Yiannopolus specifically as a gay man who could be above reproach in peddling far-right, White Supremacist ideology, and that Yiannopolus had multiple ghost writers to pen his articles and Alt-Right manifesto.