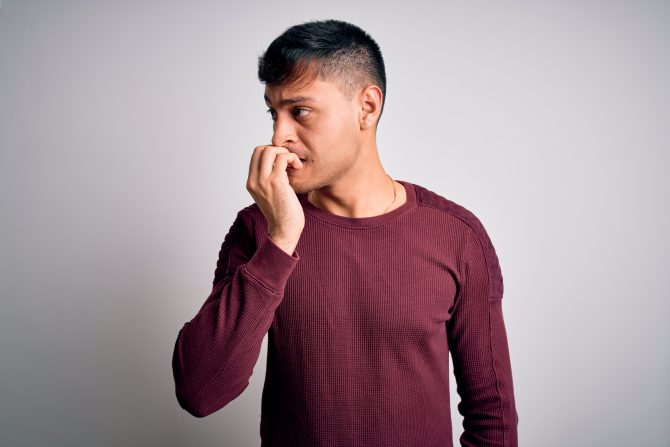 Straight males are unpredictable creatures. Some are allies. Some are bigots. And some just wanna make out. So it’s all too understandable that one Reddit user expressed feeling nervous and afraid around heteros.

This Redditor explained that he had no one to talk to about being gay until he was 21. Along the way, some people he thought were friends or potential allies bullied him, harassed him, and even sent him death threats. “I’m in a much better position now,” he said in an r/askgaybros thread. “I’m strong enough to fend and stand up for myself, but no matter what, no matter how long I’ve known the person, in the back of my mind there’s still that nervous energy when I’m around straight people. Do you ever feel that?”

A lot of lucky people couldn’t relate, having never experienced homophobia. But some commenters felt this Redditor’s pain.

“Yes, I feel nervous around straight people I don’t know, especially if I’m with my boyfriend,” one wrote. “I’m worried they’ll be homophobic and I don’t want them asking questions.”

Another said: “Yes. I definitely have that fear, sometimes even with family. Of course, I also fear myself. I’ve had blackouts where I start throwing punches out of feeling cornered and I know they could happen again if people come at me the wrong way about my ‘choices.’”

Others, meanwhile, have memories of this anxiety. “I used to struggle with that but now I view it differently,” one explained. “I think I have a broader range and greater understanding of my own masculinity than any straight man ever will. I’ve been thinking of myself in a way too pessimistic mindset even when I was fully out and accepted myself. It sounds kinda extreme but it’s true.”

Said another: “I remember feeling that ‘nervous energy’ you mentioned around groups of straight guys in high school, but I was never afraid of them, just confused. I was also never bullied, though, so your life experience probably tinges your perspective on this a bit.”

For what it’s worth, more than one commenter reported feeling more uncomfortable surrounded by gay men than surrounded by straight ones. “With gay men I always think there’s some underlying tension,” one said. “Like I’m being judged as a sexual prospect and not just as a regular person. I feel like I’m being sized up or flirted with. With straight guys there is obviously no sexual component to the interaction, it’s just two people being regular people.”

And you, dear Queerty reader? Hit up the comments to let us know your comfort level with the straights.