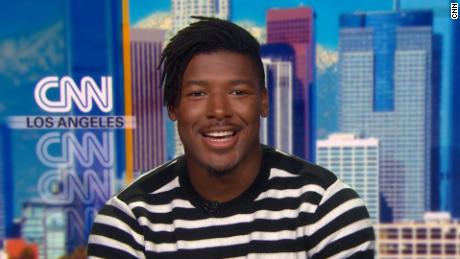 A couple of weeks ago, NFL veteran Ryan Russell came out as bisexual in a powerful interview with EPSN.

Plus, he’s Black and an incredibly bright athlete with an impeccable way with words. Talk about putting some much-needed points on the queer representation scoreboard.

If that wasn’t enough, it was quickly discovered that his Insta is filled with sexy and loving images of his handsome boyfriend, to whom he composed love poems.

Could we have minted a better role model who could help break through teams sports closet? To this day there is not a single publicly out LGBTQ athlete in any of the four major teams sports: NFL, MLB, NBA or NHL. With so few high-profile, openly bi sporting men out there, this is a breakthrough moment for everyone to enjoy.

Number one desert survival rule is to bring your best friend.

Well, in true internet fashion, social media trolls, some gay, some straight, were quick to rain on Russell’s coming out parade when it was revealed that his partner is none other than professional dancer Corey O’Brien, who happens to be white.

“Having the white partner ruined the entire moment,” wrote one Twitter user. “Wanted to be excited that Ryan Russell came out as bisexual. As a proud Black, East Asian, and Caribbean bi dude, I was happy that another person of color had broken down that wall but alas, you guessed it, his partner is white. This shit is sick and an epidemic at this point,” replied another.

Having the white partner ruined the entire moment.

In many queer corners of the ‘net, gays were quick to share photos and memes of gay, black celebrities from Shaun T and Karamo Brown to Laverne Cox, Billy Porter and even Michael Sam with their white partners, shaming them for dating outside of their race. It was odd–tons of famous straight athletes are dating interracially as well, so much so that it’s practically the norm. And of course why not? This is reflective of the world of young athletes. They are living smack in the middle of the country’s first generation of a minority-majority rule. Why not embrace a kind of racial fluidity when it comes to dating, just like we defy boundaries in the rest of our lives?

So, in the immortal words of Hillary Clinton I ask, “What difference does it make?”

OK, I’m not that naïve to believe interracial dating should go unnoticed. I get it. It’s interesting and it’s a thing. Before I clicked on the article about Russell’s coming out, I low key thought to myself, I bet he’d be dating a white dude.

I mean, the proof is already in the pudding. In 2017, Pew research found the amount of straight Black folks marrying interracially is increasing. Black men, in fact, are twice as likely to date interracially, and Black men are increasingly more likely to do so as they become more educated. And on top of all of that, white supremacy and this heteronormative, oppressive Trump-ass world we live in has done a number on all. Sexual racism on dating apps (“No blacks, no Asians”) doesn’t help either, fucking with our mental health.

Which is a way of saying, of course, it’s possible some of us may have swallowed and internalized enough anti-blackness to impact his dating choices. But unless you psycho-analyze these folks, you aren’t going to know that, so it’s best to mind your own beeswax.

Thinking about this backlash Russell is facing, I’m reminded of two separate conversations I had with Karamo Brown and Dear White People creator Justin Simien, whose hubby is white.

I remember Brown telling me about the hurtful comments he receives because he’s engaged to a white man and him telling me that just because he’s dating interracially it doesn’t mean his fears as a Black man such as discrimination and police harassment go away.

And Simien straight up told me, “You can date a white guy and still be black as fuck.”

And on top of all of that, do you know how hard it is to even find a gay man who actually wants to meet for something more than a quickie behind a 7/11? It seems most guys today only want to meet up, get off, make plans, flake, meet up to get off, watch your Instagram Stories everyday, and pretend they don’t see you in bars only to hit you up later that night to, yes, get off. Kudos to anyone finding love in this hopeless place we call Earth. And the internet expects a guy lucky enough to find a match to throw it all away because they aren’t similarly complexed? Give me a break.

I’ve written for years about my experience dating and have documented many of my unsavory experiences dating and having sex with white men—the fetishization and objectification, desired for fantasy and dismissed just as quickly, and the blatant, out-and-0ut racism.

I’ve seen many queer people of color share similar stories while discussing Russell’s story. But I’m not going to project my painful experiences onto him. Again, it’s not my story. And his experiences with his partner may not mirror. And I’m able to do this because I’ve done the work on myself and healed the wounds and trauma I’ve experienced.

My advice to people criticizing Russell or Porter or Cox or whatever Shaun T’s last name is: heal yourself. Heal your heart so it can know love when it sees it and instead of shutting its door thinking love is a stranger.