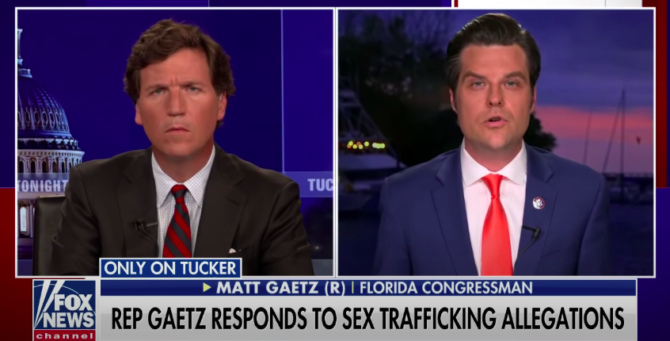 In what is perhaps the least surprising news of the week, Rep. Matt Gaetz has been accused of sleeping with an underage girl.

Late yesterday, the New York Times reported that the Department of Justice is currently investigating whether the antigay lawmaker “had a sexual relationship with a 17-year-old and paid for her to travel with him.”

Gaetz is reportedly part of a larger investigation into his buddy, former Florida tax collector Joel Greenberg, who is accused of underage sex trafficking and who he was photographed partying with, alongside “try-sexual” Roger Stone, way back in 2019.

Accused child sex trafficers Matt Gaetz and Joel Greenberg schmoozing with sedititionist cheerleader Roger Stone. Its funny how shitty people always seem to find each other in a crowd. pic.twitter.com/SvSaAmCkJ5

Greenberg pleaded not guilty to sex trafficking charges last year and was sent to jail earlier this month for breaking the terms of his bail. His trial is set for June.

Meanwhile, Gaetz hasn’t yet been charged with anything and is, of course, denying everything. He calls the whole thing an elaborate “extortion effort against my family for $25 million … in exchange for making this case go away.”

Last night, he went on Tucker Carlson‘s show, where he appeared heavily botoxed and incredibly unhinged, making all sorts of insane claims. So insane, in fact, that even Carlson, who is usually never one to shy away from a good conspiracy theory, had trouble believing him.

“I know that there was a demand for money in exchange for a commitment that he could make this investigation go away along with his co-conspirators,” Gaetz said. “They even claimed to have specific connections inside the Biden White House!”

“Now, I don’t know if that’s true,” he continued. “They were promising that Joe Biden would pardon me. Obviously, I don’t need a pardon. I’m not seeking a pardon. I have not done anything improper or wrong.”

Gaetz, whose forehead remained frozen the entire interview, became increasingly more upset, telling Carlson that he believes this may be an artful extortion plot led by none other than Rep. Ted Lieu of California.

“You know, just tonight, Ted Lieu, a Democrat, was calling on me to be removed from the House Judiciary Committee,” he whined. “I believe we are in an era of our politics now, Tucker, where people are smeared to try to take them out of the conversation.”

Gaetz then claimed this isn’t the first time he’s felt bullied by law enforcement, pointing to an alleged incident involving Carlson himself that happened two years ago.

“You and I went to dinner about two years ago, your wife was there, and I brought a friend of mine, you will remember her,” Gaetz said.

“And she was actually threatened by the FBI, told that if she wouldn’t cop to the fact that somehow I was involved in some pay-for-play scheme that she could face trouble. And so I do believe that there are people at the Department of Justice who are trying to smear me.”

To which a deeply confused Carlson replied, “I don’t remember the woman you are speaking of or the context at all, honestly.”

After the commercial break, Carlson came back on the air to call his exchange with Gaetz “one of the weirdest interviews I have ever conducted.”

Coming from a dude who has interviewed literally every piece of human trash imaginable, that’s sayin’ something!

“That was one of the weirdest interviews I've ever conducted."pic.twitter.com/lo2BqvxHJT

Watch the full exchange below.