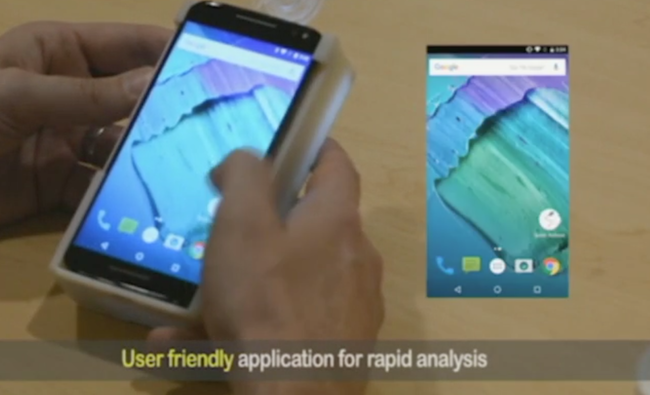 Instead of throwing down $100,000 on infertility tests in the lab, men might soon be able to assess their sperm count at home — on their smartphones.

Low sperm count is a marker for male infertility, a condition that is actually a neglected health issue worldwide, according to the World Health Organization.

A research team led by Harvard Medical School professor Hadi Shafiee is currently working on a smartphone attachment that will “count the number of sperm and measure motility, which are markers for infertility.”

Don’t worry — or get overly excited: You don’t have to, like, pour semen all over your iPhone to get results.

In fact, the process is pretty simple: You place a small semen sample on a disposable microchip and then put that microchip into the slotted attachment, which effectively turns your phone into a microscope.

Related: What Do Your Testicles Say About You?

Then you run the app, which lets you see a video of your sample. After hitting record, the app analyzes the video to both “identify sperm cells and track their movements.”

Right now, the system identifies abnormal samples with 98% accuracy. And you don’t need any special training to make the app work.

The attachment only works with Android devices, but they’re hurriedly working on a version for iPhones.

The low cost to make each device – -$5 — could potentially aid infertility care in developing nations, and possibly even help men after they’ve had a vasectomy.

“Urologists will love something like this. They can hand it to the patients and ask them to perform the analysis by themselves.”

In fact, you’d be able to send your results to the doctor via the app.

Next steps: The attachment needs to get FDA approval, and then Shafiee hopes to launch a company to begin mass-producing the devices.

“I am confident that this can go to customers at below 50.00 dollars when it is ready,” Shafiee says.

He expects fertility tests for men will soon be as ubiquitous as home pregnancy tests for women.

Find out more about the attachment in the below vid:

Related: At Age 16, He Donated Sperm To His Aunt’s Partner. 4 Years Later He Died, And His Parents Found Out